Washington, D.C.– The United States is the only advanced economy that does not guarantee its workers any paid vacation time, according to a new review of international labor laws by the Center for Economic and Policy Research (CEPR). As a result, almost 1-in-4 Americans do not receive any paid vacation or paid holidays, trailing far behind most of the rest of the world’s rich nations.

The report, No-Vacation Nation Revisited, is a comprehensive review of the latest available data on international standards for paid vacation and paid holidays.

Workers in the European Union are legally guaranteed at least 20 paid vacation days per year, with 25 and even 30 or more days in some countries. Canada and Japan guarantee at least 10 days of paid vacation per year. U.S. workers have no statutory right to paid vacations.

“The United States is the only advanced economy in the world that does not guarantee its workers paid vacation days and paid holidays,” said John Schmitt, senior economist and co-author of the report. “Relying on businesses to voluntarily provide paid leave just hasn’t worked.”

The gap between paid time off in the United States and the rest of the world is even larger when legal holidays are included. U.S. law does not guarantee any paid holidays, but most rich countries provide between 5 and 13 per year, in addition to paid vacation days. 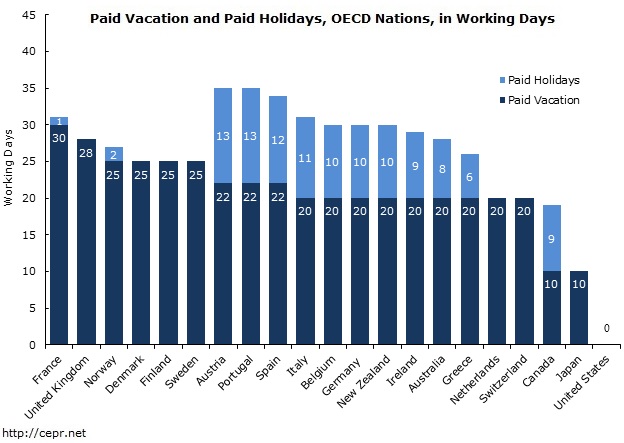 The sum of the average paid vacation and paid holidays provided to U.S. workers in the private sector ? 16 in total ? would not meet even the minimum required by law in 19 other rich countries.

The new report revisits an analysis originally performed by CEPR researchers six years ago. Since the 2007 CEPR study, the United States has made up none of the gap with the rest of the major economies that are members of the Organization for Economic Cooperation and Development (OECD).

“It is striking that six years after we first looked at this topic absolutely nothing has changed. U.S. law and U.S. employer behavior still lags far behind the rest of the rich countries in the world,” said Schmitt.

New legislation introduced by Representative Alan Grayson (FL) would bring the United States closer to the paid leave standards of other advanced economies. Congressman Grayson’s bill would require employers to provide workers with at least one week of paid leave vacation annually. The bill (H.R. 2096) would be the first piece of federal legislation to provide vacation time under federal law. The legislation would also cover part-time workers who have been employed for one year and work at least 25 hours per week.

The authors of the report also found that several foreign countries offer additional time off for younger and older workers, shift workers, and those engaged in community service such as jury duty or for union duties, getting married, or moving.

The report reviewed the most recently available data from a range of national and international sources on statutory requirements for paid vacations and paid holidays in 21 rich countries (16 European countries, Australia, Canada, Japan, New Zealand, and the United States).