By the time Hillary Clinton leaves the White House, China's economy could be 50 percent larger than the US economy

The World Bank’s updated estimates of GDP based on purchasing power parity (PPP) show a sharp upward revision to the numbers for China. As a result of these revisions, the Chinese economy is now larger than the U.S. economy by this measure.

While people are more used to seeing GDP measured at exchange rate values, PPP rates attempt to correct for the fact that some goods and services cost different amounts of money in different countries. In principle, GDP based on PPP is assessing GDP if all goods and services sold for the same prices in all countries.

What is perhaps most striking is not that the Chinese economy is now larger than the U.S. economy but that it is projected to be hugely larger in the not distant future. The chart shows projections for 2014 GDP and 2025 GDP for the two countries, applying the I.M.F.’s growth projections to the World Bank’s GDP estimates for 2012. (The numbers for China combine the GDP of China and Hong Kong. For years after 2019, these estimates apply the growth rate projected for 2016-2019.) 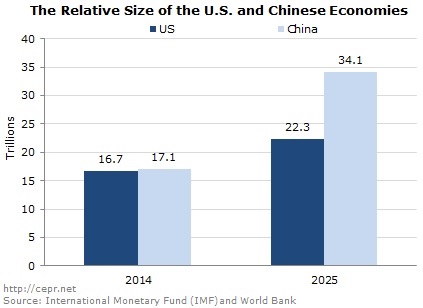 These projections show that China’s economy will be more than 50 percent larger than America’s by 2025. With four times the population of the United States it will still be far poorer in per capita terms, but its weight in the world economy (i.e. imports and exports) will depend on its total GDP.

While there is much uncertainty about these predictions, they provide a plausible scenario showing that the U.S. will not just be number two, but a distant number two in a time-frame that could include part of the next president’s tenure in office.

Paul Krugman, China’s Demographic Crisis, and the Which Way Is Up Problem in Economics