Spending on Prescription Drugs: Lies My President Told Me #3,475,652

Donald Trump’s re-election campaign has been touting that he is tough on the drug companies, unlike the wimpy Joe Biden. Perhaps in Trumpland this is true, but not in the real world. Spending on prescription drugs has actually increased somewhat more rapidly under Trump than Obama-Biden, rising at a 6.3 percent annual rate under Trump compared to a 5.5 percent rate under Obama-Biden. 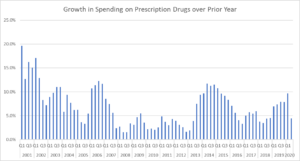 As can be seen, spending grew relatively slowly through Obama’s first term, hitting a low of just 1.9 percent in the first quarter of 2013. It then sped up over the next year before downward again at the start of 2015. In the last quarter of the administration, the fourth quarter of 2016, spending rose by 3.3 percent.

The general direction in the Trump years has been upward, with a peak of 9.7 percent in the first quarter of 2020, then a drop to 4.4 percent in the second quarter. This falloff is a direct result of the pandemic, as many people put off doctors’ visits, which meant that they would be prescribed fewer drugs. So, before the pandemic, drug spending was rising at a rapid and accelerating pace.

These data are taken from the Bureau of Economic Analysis, National Income and Product Accounts, Table 2.4.5U, Line 121.