The Real Rate of Recovery, Part 2: The Prime-Age EPOP Ratio

The prime-age EPOP ratio measures the percentage of Americans aged 25 to 54 who are employed. 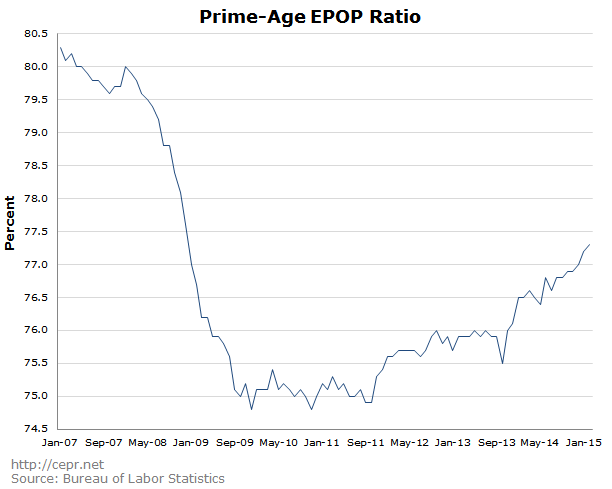 This measure has two strengths. First, by looking at the percentage of Americans who are employed, we are able to improve upon the standard unemployment rate, which only counts as unemployed Americans who “have actively searched for work in the prior four weeks”. Second, by restricting our analysis to prime-age Americans, we don’t have to worry about the aging of the population, which can cause the overall EPOP ratio to fall even as the economy improves. (For example, if a greater percentage of the population hits retirement age, many older Americans will make an active decision to stop working; yet this doesn’t tell us about the employment opportunities for those Americans who actually want to work. The same problem can occur if the population becomes younger and more Americans enroll in college. By looking at Americans aged 25 to 54, we avoid the problems associated with aging.)