The Real Rate of Recovery, Part 3: The Age-Adjusted EPOP Ratio

The age-adjusted EPOP ratio measures the percentage of Americans that would be employed if the age distribution of the population hadn’t changed since December of 2007. 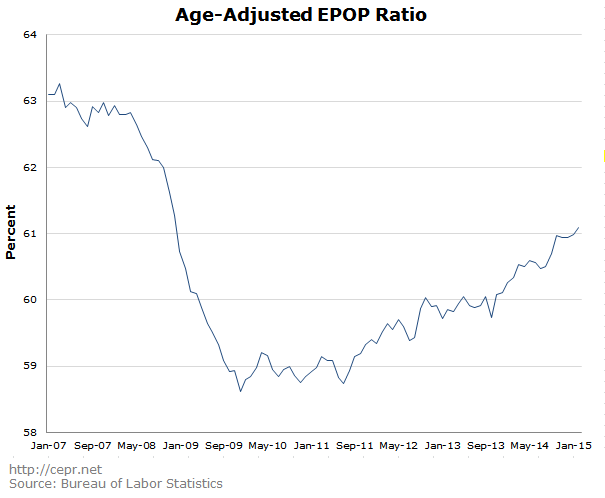 This measure has two strengths. First, by looking at the percentage of Americans who are employed, we are able to improve upon the standard unemployment rate, which only counts as unemployed Americans who “have actively searched for work in the prior four weeks.” Second, by holding the age distribution of the population constant, we don’t have to worry about the effects of aging, which can cause the EPOP ratio to fall even as the economy improves. (For example, if more Americans hit the age of 65 and chose to retire, the EPOP ratio would fall even if employment opportunities were expanding for most Americans.) However, there are two drawbacks to this methodology. First, while the Bureau of Labor Statistics publishes seasonally adjusted data for the age groups 16 to 24, 25 to 34, 35 to 44, and 45 to 54, their data for the age groups 55 to 64 and 65-plus aren’t seasonally adjusted. This means that we are undoubtedly picking up at least some seasonal effects in our measure. Second, while all groups younger than 65 have seen their EPOP ratios decline relative to December 2007, the EPOP ratio for Americans aged 65-plus has increased substantially. While this would show up as a positive in our measurement, it could be that older Americans have started working more because they are financially unprepared for retirement.