The Washington Post ran an editorial endorsing Republican House Budget Committee Chairman Paul Ryan’s proposal for ending the shutdown/debt ceiling standoff. It is apparently anxious to seize on yet another route to try to cut Social Security and Medicare benefits for seniors.

While the obvious crisis facing the country is a government that is not doing its job and an economy that is suffering enormously from a shortage of demand (i.e. too little government spending), the Post sees this as an opportunity to fix its invented crisis about the long-term budget deficit. This is in keeping with the Post’s basic philosophical principle that a dollar in the pockets of ordinary workers is a dollar that could be in the pocket of a rich person. The editorial therefore insisted once again that we have to cut Social Security and Medicare.

The story on Social Security is of course bizarre. Few people think that seniors have too much money. Most must face sharp reductions in living standards when they reach retirement. The median income for a person over age 65 is less than $20,000 a year, that’s a day or two’s pay for your typical Wall Street high flyer. Furthermore, Social Security is entirely funded from its dedicated tax for the next two decades. Even after the trust fund faces depletion in 2033 the overwhelming majority of benefits would still be payable from the tax. Eliminating the cap on income subject to the tax would fill most of the remaining gap.

The real story of budget deficits is in health care. And here the problem is that people in the United States pay way too much for the care we get. Although the quality of health care is no better in the United States than in other wealthy countries we pay more than twice as much per person as the average in other countries. If this gap persists, in the long-term it will create serious budget problems, since more than half of our health care is paid by the government.

There are two ways to reduce costs. One is to get our costs in line with what people pay in every other country. This would mean taking on the health care industry. Our doctors (who comprise close to 20 percent of the country’s richest 1 percent) would see their pay cut by roughly 50 percent, on average. We would cut what we pay for drugs and medical equipment by roughly the same amount. This could be done if we were prepared to eliminate the government protections that keep these prices so out of line with prices in the rest of the world.

This would mean opening our borders to more qualified foreign doctors and also educating more at home. (The reason free trade in physicians’ services is not being discussed in current trade agreements is that the doctors’ lobbies are too powerful and folks like the Post’s editors are happy with protectionism that redistributes money to the rich.) It would mean paying less to drug companies and medical equipment companies. It would also mean ending the massive waste of our private health insurance system.

If we got our health care costs in line with the rest of the world, there is no budget problem whatsoever. We would be projecting large budget surpluses for the rest of the century. The figure below shows the Congressional Budget Office’s most recent projections for the primary budget deficit. (This includes all spending except interest on the debt. If this is in balance, then it generally will mean that the debt to GDP ratio is stable or declining.)

As can be seen, the baseline shows modest primary budget deficits of less than 1.0 percentage point of GDP (@$160 billion a year in today’s economy) for the next 15 years. These rise to about 1.5 percent of GDP in the 2030s and eventually exceed 2.0 percent. 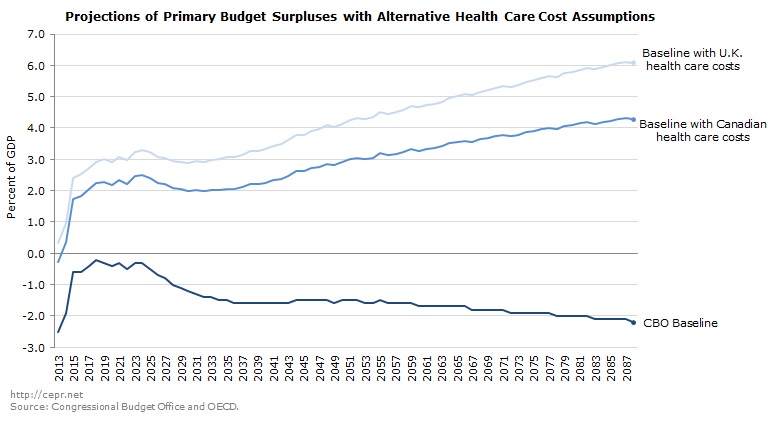 It is worth noting that even these baseline projections are not terribly scary.(You get those huge deficits that Ryan-Post types like to hype by assuming that we get large deficits and therefore large debt and then huge interest burdens. This can make for scary numbers, but it is not the sort of thing that serious people need waste their time on.) We reduced the deficit by around 5 percentage points of GDP with deficit reduction packages in 1990 and 1993. It doesn’t seem ridiculous to think that in the course of the next two decades we couldn’t find a combination of tax increases and spending cuts that would cut the deficit by 2 percentage points of GDP (40 percent as much as the 1990-1993 reductions), if that proved necessary. Since we are needlessly losing $1 trillion a year in output at present, with tens of millions of people unemployed, underemployed, or out of the work force altogether, these projections of long-term budget deficits might seem a relatively minor and distant concern.

If our per person health care costs were the same as in the U.K. then we would be spending just 40.0 percent as much on health care ($3,405.5/$8507.6). In this case our primary budget surplus would be over 3 percent of GDP for the next 15 years, rising to over 4 percent of GDP in the 2040s and eventually exceeding 6 percent of GDP by the end of the forecast period ($960 billion in today’s economy).

If the Post’s primary concern were deficits then presumably it would be focused on policies that would bring our health care costs in line with those in every other wealthy country. But it has no interest in lowering the income of doctors, insurers, and drug companies. (The last group is a big advertiser at the Post: just the facts.)  Its solution to high health care costs in the United States is to make people get less health care. And, it is prepared to use any real or invented crisis to advance this end.