The central issue in the furor that erupted a few weeks back over the “Gatsby Curve” was whether or not the sharp increase in inequality over the last three decades has depressed economic mobility. President Obama, the chair of his Council of Economic Advisers, and most of the leading experts in the field argue that today’s extreme inequality is not only bad in itself, but it also lowers economic mobility. Brookings Institution fellow Scott Winship, however, says mobility is no worse today than it was earlier in recent economic history.

Winship’s critique of the standard view on declining mobility centers on what he sees as limitations in the available data and problems with the statistical techniques used by economists analyzing the recent trends. At this point, quite a few people have offered responses to Winship’s technical concerns (including one of us (pdf) at a recent event sponsored by the New America Foundation). But, most of this recent debate has been confined to a fairly narrow (and generally technical) discussion of Winship’s criticisms of the way surveys capture, and the way economists model, income.

A recent paper (pdf) by Martha Bailey and Susan Dynarski, however, allows us to completely sidestep Winship’s concerns about measuring income across generations. Bailey and Dynarski analyze college completion rates over time and find a disturbing pattern that provides strong support for the view that economic mobility has declined substantially over the last three decades.

Here is the key figure in their analysis (click to enlarge): 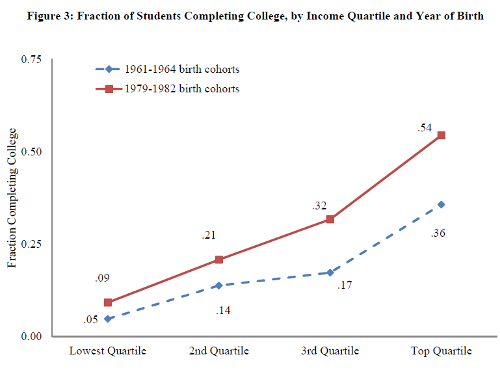 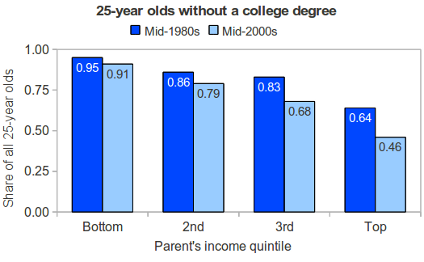 For those born into the bottom quartile almost 20 years later, the odds were much worse. Now, there were 91 (out of 100) without a college degree –a slight improvement over the situation for the earlier generation. But, these 91 non-college-educated young people born into low-income families were competing for top slots against 54 (out of 100) college graduates –not 36 (out of 100) barely two decades earlier.None of this evidence depends on how we measure income (except to assign children into the initial family income distribution) or on any modeling needed to overcome limitations in the data. And the education data leave little doubt that it is much harder for low-income children born in the 1980s to get ahead than it was for low-income kids born in the 1960s (when, of course, it wasn’t very easy either).