Senator Martha McSally’s American TRIP Act would provide a federal tax credit of up to $8,000 for individuals and families for vacation expenses — including food, beverages, transportation, sporting events, and other live entertainment — incurred within the United States. Yesterday, Trump’s economic advisor Larry Kudlow said that the White House is considering something along the lines of the McSally proposal. 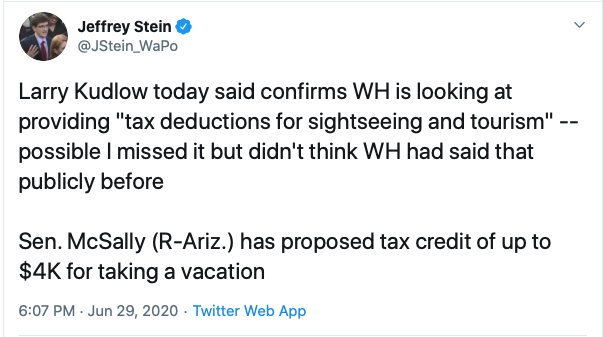 The McSally trip credit is nonrefundable so that most working-class people would receive no or only modest benefits from it. In fact, as Matthew Gradner of ITEP notes, “married couples would need about $70,000 of taxable income, which in turn means adjusted gross income of more than $94,000” to claim the full credit. (To provide a sense of comparison, only about one-in-four federal tax returns had an adjusted gross income above $75,000 in tax year 2017).

Establishing a nonrefundable tax credit or tax deduction for vacation expenses is a very bad idea. But the  McSally proposal’s poor design shouldn’t blind us to the fact that annual vacations are a necessity, and that social policy has a legitimate role to play in ensuring that all people are able to take one.

Among wealthy nations, the United States is an outlier when it comes to ensuring vacations for all. As CEPR recently documented, the United States continues to be the only advanced economy that does not guarantee its workers paid vacation. By contrast:

Vacation policy in wealthy nations other than the United States isn’t limited to requiring employers to provide paid vacation days.

In the United Kingdom and across the countries of the European Union, not being able to afford to pay for one week’s annual holiday away from home is tracked by statistical agencies as a form of material deprivation alongside eight other material deprivation indicators.

The United States, however, only tracks limited forms of material deprivation, mostly those related to food and housing. The federal government should add questions on the ability to afford a vacation to surveys like the Current Population Survey and the Federal Reserve’s Survey on Household Economics and Decisionmaking.

Some wealthy nations go further and use public funds to reduce vacation inequality. France has a public agency, l’Agence Nationale pour les chèques-vacances (ANCV, or National Agency for Holiday Checks), with the mission of “encourag[ing] as many people as possible to go on holiday and reduc[ing] inequalities in access to holidays and leisure.” In 2018, ANCV helped more than 11 million French people (about 1/6 of the French population) afford a vacation.

The McSally travel tax credit deserves to be widely mocked as another tax giveaway to the well-off. But progressives shouldn’t shy away from using social policy to reduce vacation inequality.

The Washington Post Wants to Cut Social Security and Medicare (yeah, what else is new?)