Social networks and the development of platform technologies have drastically transformed the way people live, work, and spend their money. The use of information and communication technologies has become an important aspect of jobs in occupations ranging from medical assistants to fast food operators, lawyers, steel workers, and others employed in traditional employment relations. The growth and popularity of online and app-based platforms like Uber, GrubHub, and TaskRabbit have raised the profile of the gig economy* and created the impression that employer-less work and gig jobs are a pervasive aspect of modern employment. A lack of consistent, rigorous data on twenty-first-century employment relations allowed speculation about the role of independent contractors, and especially gig workers, to dominate conversations about the future of work.

Predictions of the rise and dominance of the gig economy led many observers to fear these types of jobs would supplant traditional employment relations and leave many workers without the protections of minimum wage, overtime pay, family and medical leave, employer-provided vacation, or pension benefits. A 2015 study by economists Alan Krueger of Princeton and Larry Katz of Harvard provided academic support for the predicted shift of workers from traditional to alternative work arrangements. They found that between 2005 and 2015 the share of independent contractors in total employment rose by an impressive five percentage points, from 10.7 percent to 15.8 percent, and attributed much of the increase to gig jobs with Uber, Lyft, and similar companies. They also reported that 95 percent of all job growth over that period was in gig jobs, further fueling the belief that the gig economy holds the key to the future of work.

In May 2017, the Bureau of Labor Statistics (BLS) repeated its contingent worker survey (CWS) — a rigorous and systematic repeat of its 2005 and earlier surveys. In contrast to the Katz and Kreuger study, the CWS found that, as in 2005, nine-in-ten workers held a main job characterized by traditional employer–employee work arrangements. The CWS found no increase in the share of independent contractors in total employment over the 12 years from 2005 to 2017. And, it found that just 1.0 percent of workers held a gig economy job either as their main job, second job, or to make additional income. A study by JPMorgan Chase that tracked earnings of 39 million Chase checking account holders found that between October 2012 and March 2018, just 1.1 percent of the sample of account holders included a worker with earnings from an online platform, 1.0 percent from transportation platforms, and 0.1 from other employment platforms.

The disconnect between speculation about the prevalence and threat of gig jobs and the reality of how many workers actually held such jobs can be seen in Figures 1 and 2. 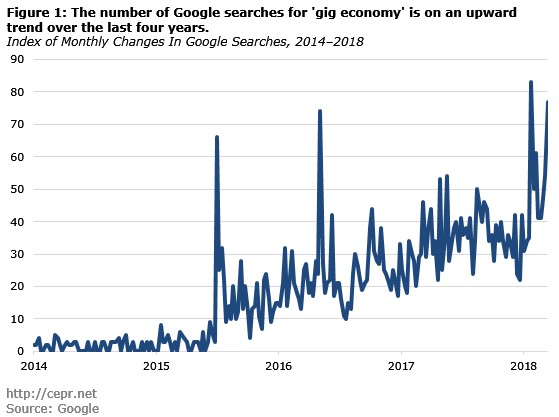 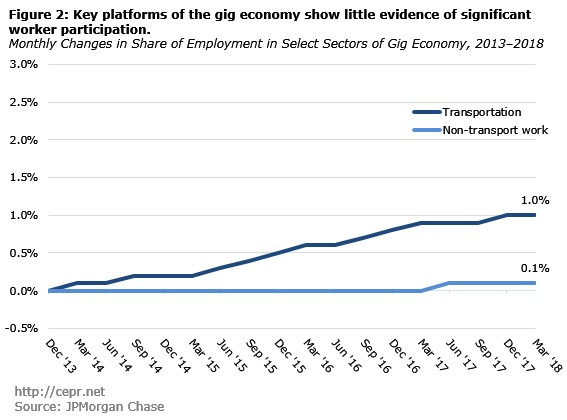 In Figure 1, the term gig economy has seen a steady growth in Google searches over the last four years, punctuated by occasional surges. The first two dramatic increases in gig economy Google searches began in mid-2015 to late-2016 coinciding with the release of the study from Katz and Krueger. The rise in searches thereafter reflects the reception of the study and the dominance of the gig economy in discussions about the future of work. In contrast, Figure 2 shows that the share of workers that participated in transportation and non-transport work platforms has seen very little growth over the past four years, with employment in both sectors reaching only 1.0 or 1.1 percent in the BLS and JPMorgan Chase studies.

Katz and Kreuger have now walked back their earlier results. In a new paper released in January 2019, they note that what they thought was a trend of rapidly increasing gig jobs was actually a blip, due to the slow recovery from the recession and financial crisis of the 2007–2008 period. Many workers used short-term, freelance, and contingent work to fill the gap in income. This was a stopgap for working families, rather than a trend in employment; workers turned to standard jobs as the economy improved and these jobs became plentiful again. As for the scare statistic that 95 percent of net new jobs created over that period went to independent contractors, the 2005–2015 period saw widespread job losses in many sectors of the economy so that any sector that created jobs (i.e., health care) would have accounted for the lion’s share of net job creation. By 2017, it was clear that employment growth was mainly in standard work arrangements, which increased its share of employment slightly compared with 2005, while the share of independent contractors in employment declined slightly over the 2005–2017 time period.

While the data show that the traditional world of work won’t be disappearing anytime soon, the questionable speculations about the gig economy that have a hold on popular imagination and on policy discussions is also not likely to soon dissipate.