In October of 2009, the national unemployment rate peaked at 10 percent; as of December 2016, it was down to 4.7 percent. The Federal Reserve Board voted last month to raise interest rates in part due to this low rate, and the decrease in unemployment has generally been hailed as a sign of recovery. But how accurately do those numbers reflect the current employment situation for most workers? This post looks at prime-age employment rates for several different demographic groups to create a clearer picture of how the recession and recovery affected American workers.

Finally, we break down the results by gender and race in order to see which demographic groups lost the most jobs during the recession. Because data are not available on a seasonally adjusted basis for most of these measures, we use 12-month averages of the not-seasonally-adjusted data.

The Loss in Employment 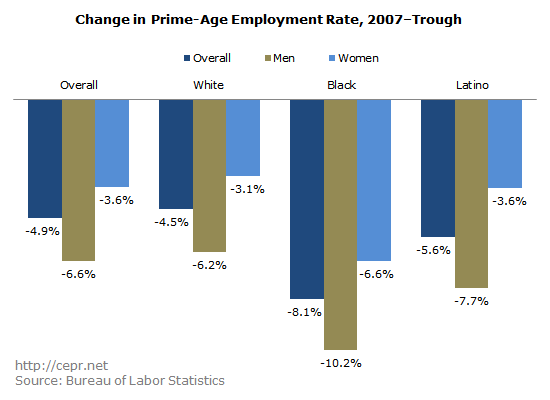 For both genders, black workers saw the largest drop in employment between 2007 and the low point during the past decade. In each racial or ethnic group, men experienced far more significant declines in employment than women. The period of declining employment was shortest in duration for Latino men and was longest for white women. 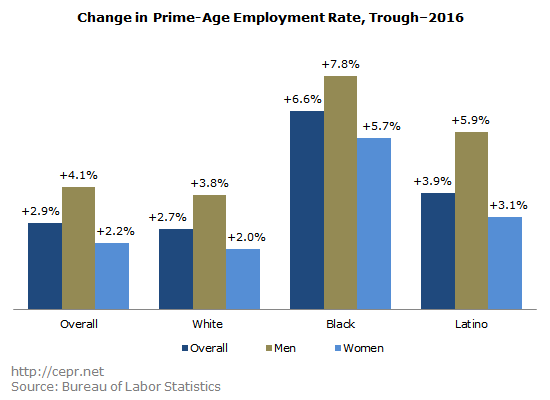 Although they experienced a less extreme recession, white workers are experiencing a slower recovery. Black workers, especially black women, have experienced the most significant recovery. 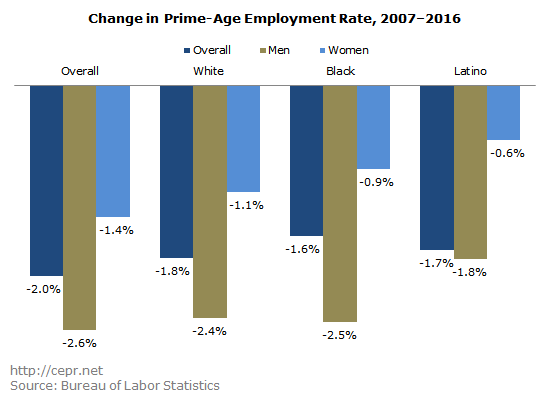 In general, employment is still down the most for black and white men. The loss of employment for prime-age black men is especially notable given that black men were less likely to be employed than white or Latino men even before the recession: 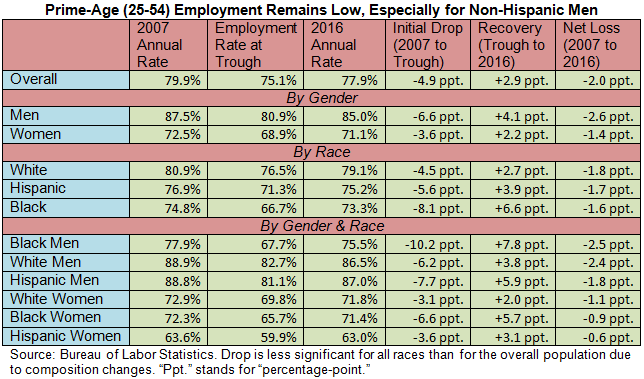 Although unemployment is low, prime-age employment numbers illustrate that America’s workers still have not recovered from the recession. For men in particular, the unemployment figures do not give a complete picture of the number of people out of work.

Financing Drug Development: What the Pandemic Has Taught Us

The Big Tech Hearings Could Be a Model for Corporate Accountability

The Trump Record on Unemployment