Are Disabled Workers a Growing Burden? Not Really

As you may have heard, spending on Social Security Disability Insurance has been rising over the past 25 years. Many major news outlets have portrayed this increase as a looming disaster with headlines such as the following:

Given this sort of reporting, a normal reader might think that assistance to disabled workers has been “spiraling out of control.” But that just isn’t true.

The last distinction is important when weighing the burden that SSDI and WC impose on society. From the point of view of a typical worker, it doesn’t matter if they have to pay an extra $5 in WC insurance premiums or an extra $5 in taxes to fund SSDI; either way, they are down $5. This means that if one program increases in cost but the other decreases by a greater amount, the worker is left paying less overall. [4]

Therefore it is important to note that while SSDI costs have indeed gone up, the increase has been almost fully offset by a decline in WC spending. This can be seen in the figure below, which shows SSDI spending, WC spending, and “SSDI plus WC spending” as a percentage of GDP from 1980 to 2015. 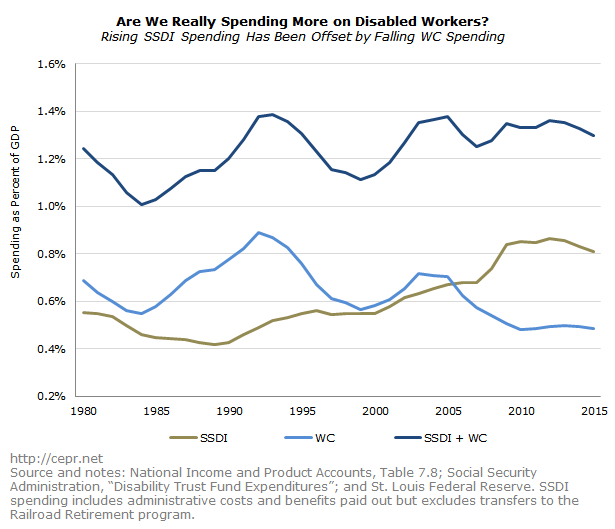 Since then, SSDI has covered an ever-growing share of the two programs’ combined costs — and this has created the perception that spending on disability benefits is “out of control.” But the reality is that total spending on the two programs has barely budged over the past thirty-five years. In the graph above, “SSDI plus WC spending” fluctuates as a percentage of GDP but always stays within the relatively narrow range of 1.0 to 1.4 percent. Relative to 1980–81, SSDI spending is up 0.26 percent of GDP, but total spending on WC and SSDI is up by just 0.08 percentage points. In other words, that “out of control” increase in disability payments amounts to an extra 8 cents out of every $100 of GDP. Insofar as spending on disabled workers has increased at all, it has been to an incredibly minor degree.

[1] SSDI is not to be confused with Supplemental Security Income (SSI), which is a separate program providing cash assistance to disabled Americans; while there are many differences between the two programs, the most important is that SSDI is only available to workers.

[2] For greater detail on the similarities and differences between SSDI and WC, see p. 5 and 21 of this 2015 CEPR report.

[4] However, it can matter to the company. WC premiums are “experience-rated,” meaning that companies and industries with higher WC take-up rates pay higher premiums than companies and industries with fewer injured workers. If injured workers who should be collecting WC instead receive SSDI, then firms have less incentive to make their workplaces safe. The costs associated with these injuries are born by the workforce as a whole rather than the companies causing them.