865 days after Haiti’s cholera epidemic first began, with over 8,000 dead and some 650,000 sickened, the government of Haiti, with international support, officially launched a ten-year cholera eradication plan today after months of delays. The plan calls for an investment of $2.2 billion in clean water and sanitation infrastructure, with some $485.9 million needed for the next two years. Currently 31 percent of the population does not have access to potable water, while 83 percent lack access to adequate sanitation. By 2022, the plan aims to deliver potable water and improved sanitation services to 85 and 90 percent of the population, respectively.

The plan notes that in the short term, “actions will focus on preventing the transmission of cholera from one person to another through the use of drinking water disinfected with chlorine, and the promotion of hand washing, good sanitary practices, and food hygiene.” Resources will also go to capacity building and training for the relevant government agencies, in particular the health ministry (MSPP) and the water agency (DINEPA). Over the long-term, some $650 million will go to DINEPA to build water supply systems in the 21 largest cities in the country, though most of this would start after the next two years. A breakdown of funding needs by sector, program and time-frame can be seen below. Overall, about 70 percent of the needed funds are to go to water and sanitation provision, though just over 10 percent of that is planned to be spent in the first two years.

The plan also envisions a strengthening of the public health sector and of the coordination between NGOs and the government. To this end, the government plans to “integrate their support into the national health system.” Through investments in training, capacity building and by channeling funds through the domestic institutions in charge of each sector, the plan aims to create a stronger public sector overall. This could be especially significant given that aid for the cholera response (and for the overall relief and reconstruction effort) has largely bypassed the Haitian government. According to data from the U.N. Special Envoy, only 2.5 percent of humanitarian spending for cholera went through the Haitian government. As noted in the plan, the “lack of investment coming directly from the country’s fiscal budget represents a threat to the stability of the” water and sanitation sector.

There are to be three evaluations of implementation done in 2014, 2017 and 2022 and an audit will be conducted at the half-way point and at the conclusion of the plan. Additionally, a technical committee made up of high-level representatives from relevant government agencies will meet quarterly to assess progress and propose remedies.

Responding to the plans’ launch today, implementing partner PAHO’s Director Carissa F. Etienne noted that, “For the plan to be implemented, Haiti’s friends in the international community must align their efforts and harmonize around this plan and provide the necessary financial resources.” Yet thus far, meaningful support has been hard to find.

Over two months ago, Secretary General Ban Ki-moon announced an initiative to support the Haitian government’s cholera eradication plan, which as Jonathan Katz has noted has been used by the “U.N. to shut down talk about the epidemic’s cause.” A host of scientific studies indicated that foreign troops belonging to the UN Stabilization Mission in Haiti (known as MINUSTAH) were the source of the disease’s introduction, yet last week the U.N. rejected a claim brought by over 6,000 victims seeking not only damages but also for the U.N. to make the investments necessary to rid Haiti of the disease.

In announcing the initiative in December, the U.N. said they were contributing $23.5 million to the plan, or a mere 1 percent of what is called for. This compares to over $650 million that the U.N. is spending annually on the same military mission which brought the epidemic to Haiti. In fact, the U.N. has spent nearly $2 billion on MINUSTAH since the earthquake, enough to cover almost the entire cholera eradication plan.

In December, Ban Ki-moon said that he would “use every opportunity” to mobilize funding for the cholera response, yet at the official launch today, the only new funding announced was $500,000 from PAHO, leaving the plan woefully underfunded. Overall, just $238 million has been secured, most of it from existing funds. This is less than half of what is needed over just the first two years, to say nothing of the full ten-year plan. A donor conference organized by the World Bank may be in the pipeline, but it is unclear how effective that may be. Donors have failed to even live up to their post-earthquake pledges, disbursing just over 50 percent so far.

And it’s not just the long-term funding that is missing; emergency funding for the cholera response is drying up as well. Despite an increase in cholera cases following Hurricane Sandy in October, the $32 million appeal for cholera in 2012 ended the year just 32 percent funded. With the number of NGOs responding to cholera dwindling, and funding for the government practically non-existent, the last few months have actually seen an increase in the number of cases and in the fatality rate compared to from the same time a year before.

In the first 7 weeks of 2013, 115 Haitians reportedly died of cholera compared to just 15 during the same time last year. Perhaps even more worrisome is that the fatality rate jumped from 0.2 percent last year to 1.0 percent this year, meaning that one is five times more likely to die from contracting cholera today than they were last year. The situation is unlikely to get better fast, as one health expert told HRRW in January, “2013 will be even worse than 2012.” 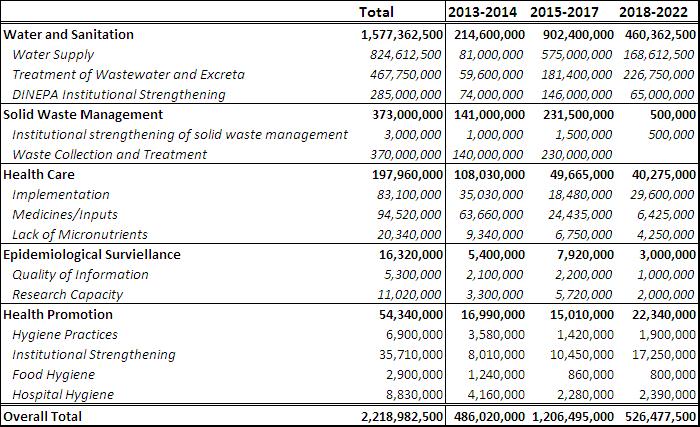