Costs and Benefits of the 1990 Clean Air Act Amendments

Opponents of amendments to the 1990 Clean Air Act (CAA) argued that increased regulations would damage the economy, leading to a loss of jobs and output. However, the legislation’s passing produced nowhere near the economic devastation predicted. Instead, projections by the Environmental Protection Agency (EPA) expect the benefit of the CAA amendments to reach a cumulative total of 2.0 trillion dollars by 2020 or a bit less than 0.5 percent of GDP for this period. For comparison, the estimated cost of complying with CAA regulations is 65 billion dollars or less than 0.02 percent of GDP over this thirty year period. That is $30.77 of benefit for every dollar spent on regulation. 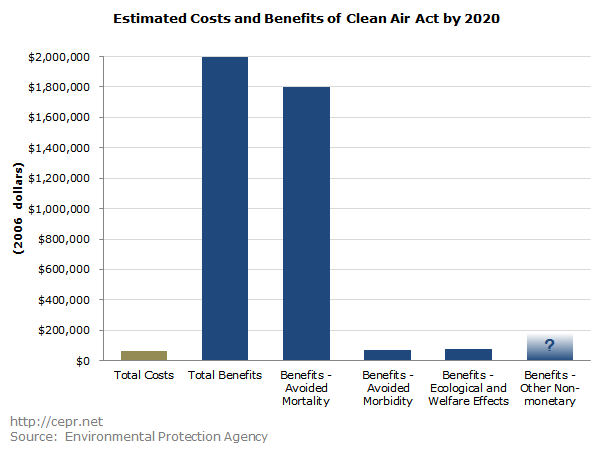 In 2020 alone, the amendments are expected to prevent over 230,000 early deaths. Those prevented deaths come in the form of decreased adult and infant mortality from exposure to the ozone and fine particle pollution. They also estimate a decrease in chronic bronchitis, acute myocardial infarction, and asthma exacerbation. The amendments will decrease emergency room visits by 120,000, prevent 5,400,000 missed school days, and 17,000,000 lost work days.

The lack of any noticeable economic decline in the years directly following the amendments’ implementation support EPA projections of higher economic growth. Which it says will come as the result of decreasing sick days and lower medical costs from air pollution-exacerbated ailments. The benefit estimates also quantify the increase in visibility since 1990 at a 67 billion dollar value for “residential and recreational visibility”. 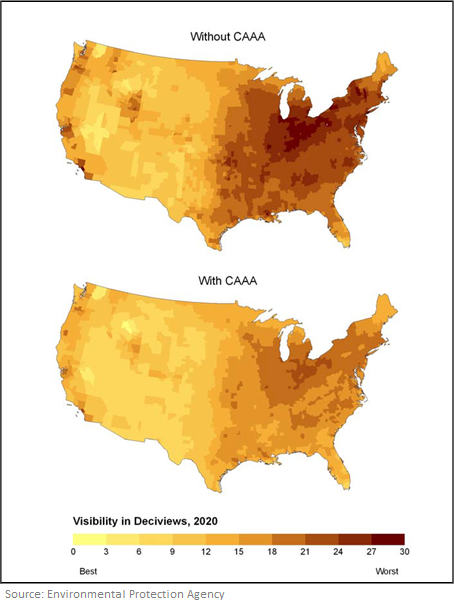 This study indicates that if the opponents to the 1990 amendments of the Clean Air Act had succeeded in blocking these measures, the country would be poorer today as a result.