Higher Profits for Companies Does Not Translate Into Higher Investment

Since there are many more wage earners than people with substantial stock holdings in the division of corporate income between wages and profits, most people stand directly to gain from a smaller profit share. Nonetheless, there is an argument for a higher profit share (and a lower wage share) if companies will invest more when their profits rise. In that case, higher investment would lead to more growth, which would benefit workers as well, even if their share of income might be somewhat lower. However, as this post shows, the data do not backup up this argument.

Corporate profits before-tax are currently only one percentage point higher as a share of GDP than in 1970. However, after-tax profits are now about 2 percentage points higher compared to their 1970 levels. 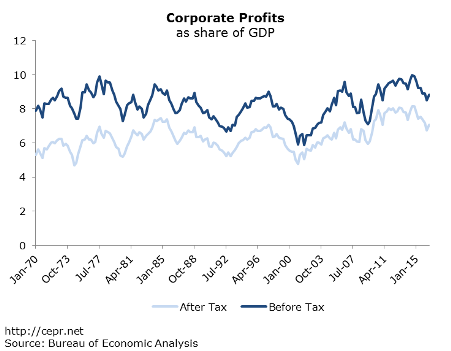 The figure above illustrates before- and after-tax corporate profits as a share of GDP since 1970.[1] Until the 1980s, the spread between before- and  after-tax profits was significantly larger, with a difference of about 3 percent of GDP. This difference has since decreased to about 2 percent of GDP, as corporate taxes have fallen sharply relative to GDP. After tax profits comprised 5 percent of GDP in 1970, and peaked at over 8 percent between 2012 and 2014 before declining in the past two years.

The higher profit share did not have much of an impact on investment. 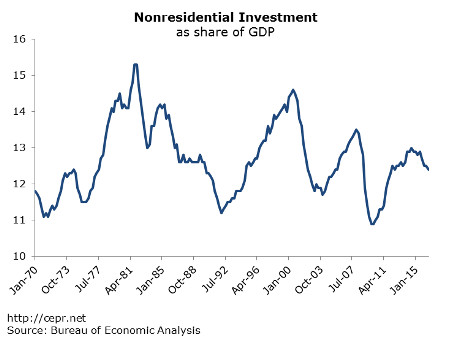 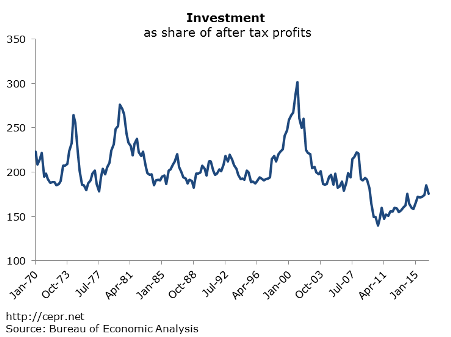 The assumption that a higher profit share will translate into higher investment does not fit the basic data. Companies do not automatically invest more if they have higher profits, especially if the economy lacks sufficient demand to justify those investments.