How to Decimate the Corporate Tax-Avoidance Industry

The Inflation Reduction Act includes a remarkable innovation. Share buybacks will be taxed at a 1% rate. This is a huge deal, not only because it taxes money that was often escaping taxation at the individual level, but it is a move away from basing the corporate income tax on profits, which can be easily manipulated, to taxing returns to shareholders.

It is time for a major and simple overhaul of the corporate income tax system. The main problem with the current system is that it is focused on the wrong target. Instead of taxing corporate profits, we should be taxing stock returns to investors.

The big issue here is that corporate profits are not a well-defined concept. A thousand issues arise in determining profit, all of which depend to a substantial extent on judgment calls by accountants. Depreciation of capital is the most obvious problem, but there are many others.

While profits are something that we cannot see, returns to shareholders can be easily seen. This is simply the increase in market capitalization, plus whatever money is paid out in dividends. This information is readily available on dozens of financial websites.

Before explaining how this alternative would work, it is worth going through some recent history.

Democrats in Congress were unanimous in opposing the Tax Cut and Jobs Act (TCJA) the Republicans pushed through Congress in 2017. However, there is one aspect of that tax cut law that nearly all Democratic economists would favor: lowering the corporate tax rate in exchange for limiting tax deductions.

Prior to the 2017 tax cut, the corporate income tax rate was 35%. However, few companies paid anything close to this rate. Actual tax collections were typically around 20%-22% of corporate profits.

While the 35% nominal tax rate put the US at the top of OECD countries, our effective tax rate was slightly below the median.

It makes little sense to have a high tax rate that is easily avoided or evaded. This simply encourages companies to spend large amounts of money gaming the system. This gaming is a complete waste from an economic perspective. We have many highly skilled people spending their time finding ways to play tax tricks rather than doing something that is economically productive. This is why almost all economists would prefer to have a lower tax rate that is actually collected.

Unfortunately, the TCJA that Trump signed into law did not deliver on this promise. While it did sharply lower the nominal tax rate—from 35% to 21%—companies still find it easy to avoid paying taxes. In 2019, the overall effective tax rate was just 13.3%, not even close to the posted rate. 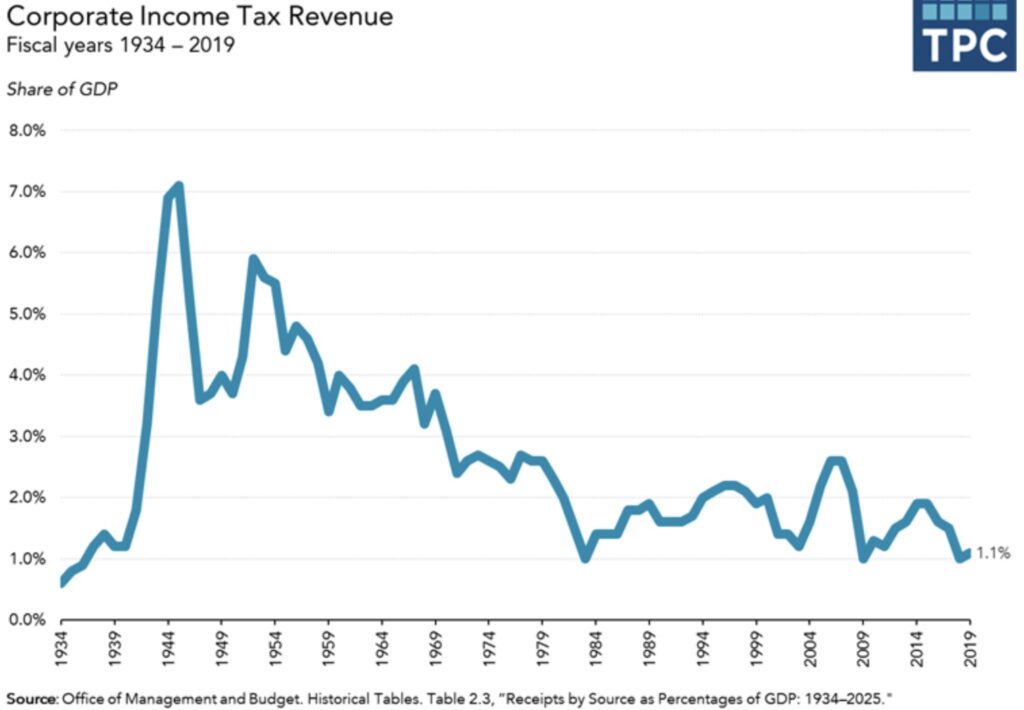 Although the Trump administration probably had little interest in actually cutting down on tax avoidance and evasion, the taxation of stock returns gives us a surefire way to accomplish this reform. We simply apply whatever tax rate we are targeting to the returns that shareholders receive in a given year.

There is also nothing that corporations can do to hide the returns on their stock unless they want to rip off their shareholders in addition to ripping off the government. If we want to have a 25% corporate income tax, for example, we can simply tax the returns to shareholders at a 25% rate, and we know exactly what we will get. (We could allow averaging, say over five-year periods, to smooth out tax payments.)

In addition to making the corporate income tax more easily collectible, shifting the basis of the tax from reported profits to returns to shareholders will radically reduce the size of the tax shelter industry. As it stands now, companies spend tens of billions of dollars each year hiring lawyers and accountants to minimize their tax burden.

These expenditures on tax dodges are a complete waste of resources and undermine the purpose of the corporate income tax. As the Modern Monetary Theory crew reminds us, the purpose of taxes at the national level is to reduce demand in the economy. Insofar as companies spend large amounts of money trying to avoid paying taxes, the goal of the corporate income tax is undermined.

The tax avoidance industry is also a major source of inequality. Creative tax lawyers and accountants can make huge salaries by developing innovative tax dodges. We can put many of these people out of business by basing the corporate income tax on stock returns, which are completely transparent.

The taxation of share buybacks in the Inflation Reduction Act is a small but important step in this direction.

It shows that we do not have to use profit as the basis for the corporate income tax. After it has been in place for a few years, and we have the opportunity to see how effective it is in raising revenue, perhaps we can shift the basis for the rest of the corporate income tax to the stock returns we can all see, rather than the profit statements that are conjured up by accountants.