Inequality Is the Threat to Our Children’s Living Standards, Not Social Security Taxes

Those pushing to cut and/or privatize Social Security have long tried to rest their case on an appeal to generational equity. They argued that the taxes needed to support baby boomers would impose a crushing burden on our children and grandchildren.

This argument flies in the face of reality. If we see the sort of wage growth projected by the Social Security trustees, and if it is evenly shared, then real wages would be 55 percent higher in 2045 than they are today—a $61,388 median annual wage compared to $39,560.

Suppose that we close the projected shortfall in Social Security entirely by raising the Social Security payroll tax, with no other revenue increases and no cuts in benefits. In this case, our children would see after-tax wages that are 51 percent higher than what we earn today, with a median wage of $59,547.[1] It’s hard to see the generational injustice here. (It is worth reminding those who consider this tax to be a generational injustice itself that we now pay a far higher tax rate than our parents or grandparents did.)

Of course, we can use other methods to fill the shortfall. If we eliminated the cap on taxable wages so that all wage income was subject to the tax, we would need a considerably smaller increase in payroll taxes. In this case, the after-tax wage for a typical worker would be 53 percent higher in 2045 than it is today, or $60,707 a year.

Most workers have not been seeing real wage increases in the last three and half decades. This is because most wage growth has gone to those at the top: CEOs, Wall Street bankers, and highly paid medical specialists. If this pattern continues, then our children and grandchildren will not see much improvement in living standards. In this case, real wages for a typical worker will be just $41,815 a year in 2045, or only 6 percent higher than they are today.

The chart below summarizes these scenarios. 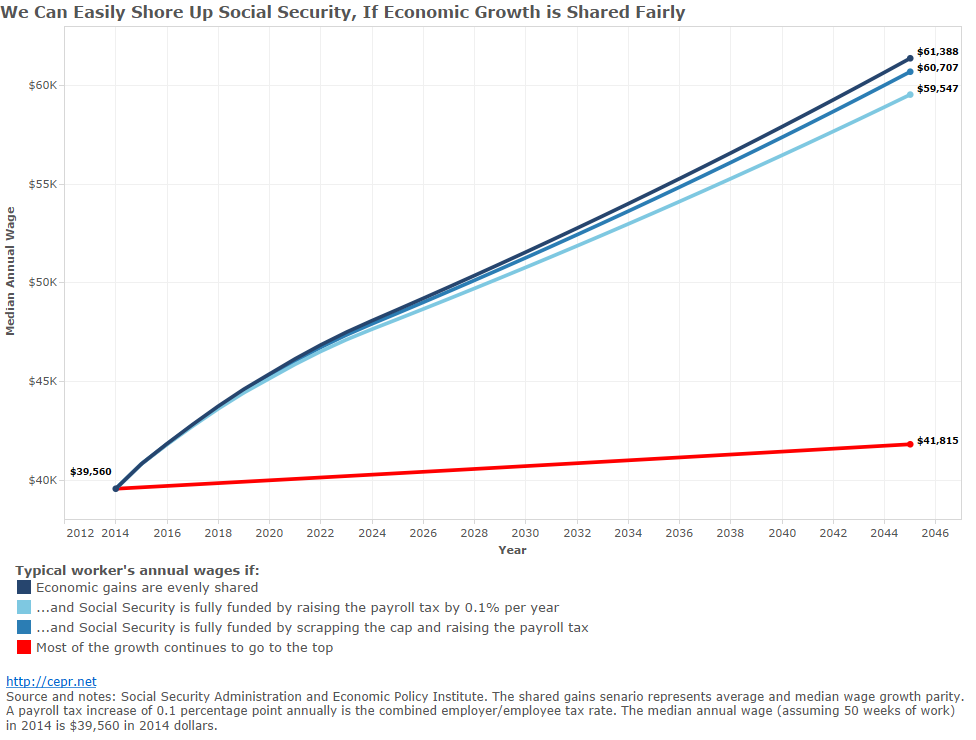 If most of the growth continues to go to those at the top and real wages are only 6 percent higher in 2045, then we may really owe an apology to our children and grandchildren. But the problem will not be their Social Security taxes, the problem will be that we handed them an economy that was rigged so that the rich get all the gains from growth. That would be a serious injustice.