Last week, the Bureau of Economic Analysis (BEA) released its GDP report for the second quarter of 2015. The BEA’s findings were generally positive: it reported that the economy grew at an annualized 2.30 percent rate between the first and second quarters of 2015, and it revised its first-quarter growth estimate upwards by 0.8 percentage points. Over the past year, real GDP grew 2.32 percent, in line with the second-quarter growth rate. This is 0.21 percentage points better than the average growth rate of 2.11 percent since the second quarter of 2009, when GDP hit its end-of-recession trough.

However, a 2.32 percent growth rate is insufficient for economic recovery. The Congressional Budget Office (CBO) estimates that the output gap—the difference between GDP and what GDP could be if demand weren’t depressed—is currently about 2.93 percent of potential GDP. In order to close the output gap in three years, the economy would have to grow at an annualized rate of 3.13 percent, far faster than it has grown over the last year or over the last six years: 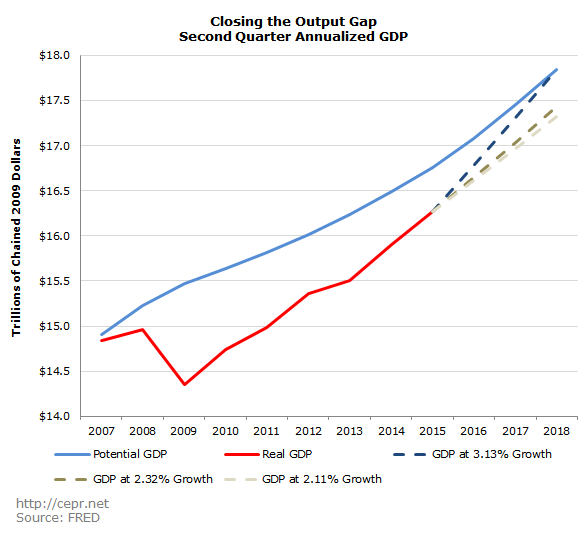 Potential GDP is projected to grow 2.16 percent per year over the next decade. In order to fully recover, the economy will not only have to match this growth rate, it will actually have to grow faster so as to close the existing output gap. At the current growth rate, GDP will remain depressed for over ten years (estimates of potential GDP only run to 2025): 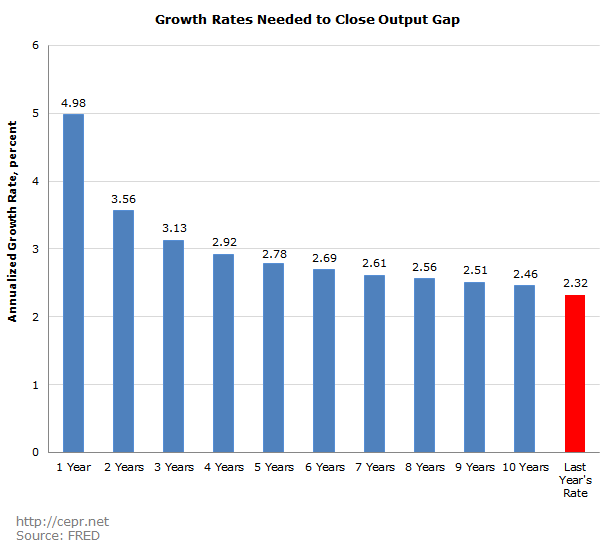 It’s good that the economy has been growing steadily for the last six years. But growth has nonetheless been too tepid to achieve true recovery. If the CBO’s estimates of potential GDP are correct, we’re not even halfway through the Lesser Depression.