All but a handful of Republican-led states have announced their intent to withdraw from the federal government’s supplemental unemployment benefits program. Doing so will reduce benefits for jobless residents in these states by $300 per week.

Republicans have blamed the more generous benefits for labor shortages and sluggish recovery in employment in April. They claim that a drawdown is urgently necessary to motivate beneficiaries to rejoin the workforce. This course of action is misguided and will disproportionately harm a group that has already borne an outsize share of the pandemic’s economic burden: working-class mothers.

Women have suffered greater job and income losses than men during the COVID-19 crisis, a historic first in the U.S. This ‘shecession’ has not been evenly distributed. Comparative analysis of 2019 and 2020 data from the Current Population Survey reveals that working-class women (those without a college degree) faced steeper declines in employment, with the largest reduction occurring among working-class mothers. Working-class mothers also experienced the largest labor-force exodus; the share who were not in the labor force increased by 2.8 percentage points, representing the exit of over 200,000 working-age women between 2019 and 2020. 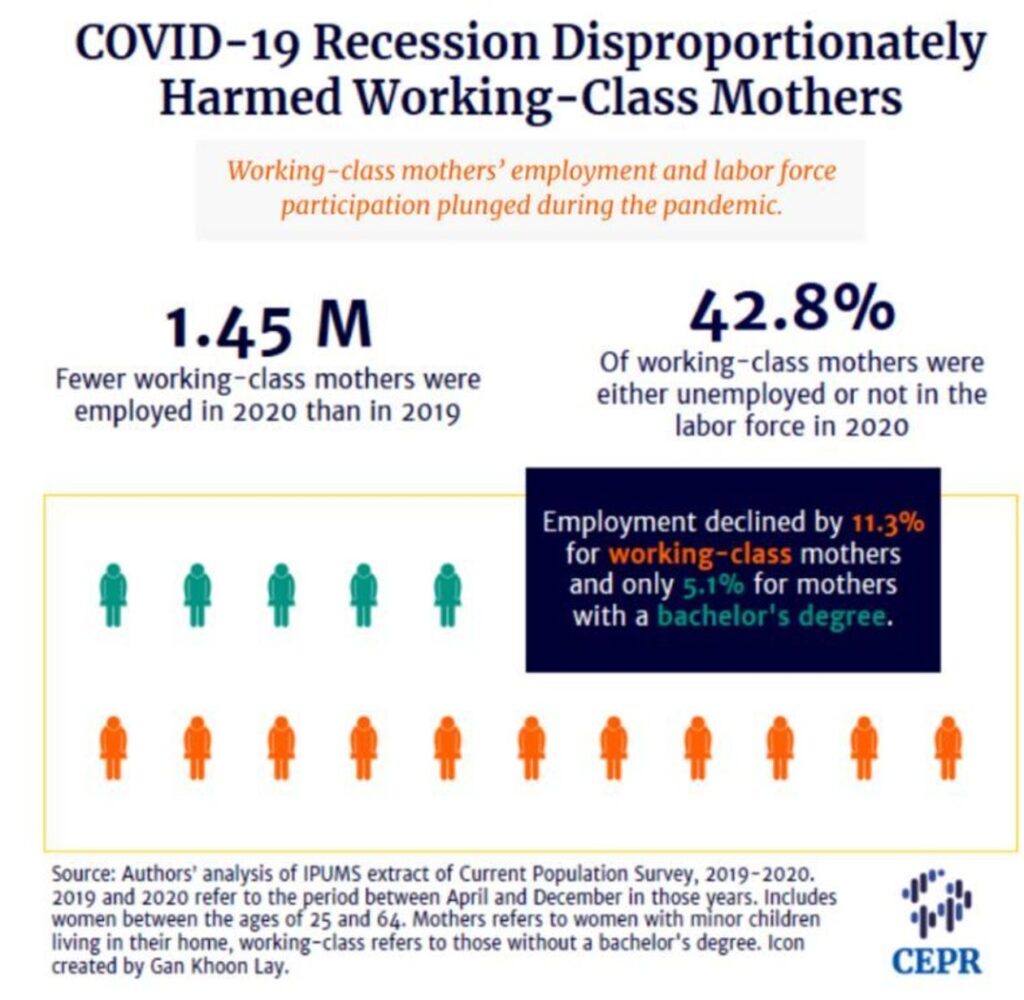 Cuts to unemployment benefits are partially predicated on the notion that the pandemic is over and it’s time to return to a “normal” economy. Data from the April 2021 monthly Current Population Survey suggests that this transition is already under way, but only for some.

First, the pandemic has devastated the nation’s already fragile child-care system. Parents have seen their caregiving responsibilities increase amid school and day-care closures, and mothers shouldered more of this responsibility than fathers. Data from the Household Pulse Survey indicates that working-class people are less likely to hold jobs that are compatible with remote work. Combined with remote schooling, the lack of affordable child-care is especially burdensome for working-class parents whose jobs require them to physically leave their homes.

Meanwhile, vaccines for children between the ages of 12 and 15 were approved in the U.S. just a few weeks ago, meaning that some states will have eliminated supplementary unemployment benefits before most of these young people can be fully vaccinated. There is still no vaccine approved for children under the age of 12, and this age group appears to be more susceptible to variants of the virus.

Combined with the fact that many working-class jobs do not offer paid family or medical leave, it is understandable that working-class mothers would hesitate to risk their and their families’ health by returning to work.

The notion that supplemental unemployment benefits are to blame for labor shortages is also shaky. Economists found little evidence for it when they explored the issue last summer, at which point the supplement was $600 per week instead of $300. Additionally, many of the states that intend to opt out of the supplemental benefits have already reinstated work-seeking requirements for beneficiaries, meaning that claimants must demonstrate that they are actively looking for a job in order to qualify.

All in all, it is unlikely that the recovery is being held back by the additional $300 in unemployment benefits. Prematurely ending these benefits without addressing the barriers that continue to hinder recovery for hard-hit groups will almost certainly have a punitive effect.

If Republicans really want to hasten the return to “normal,” they should invest in care infrastructure and paid leave, enforce workplace safety standards, unequivocally encourage their constituents to get vaccinated (and make it easy for them to do so) at the earliest possible opportunity, and ensure that employers offer livable wages and benefits. Ripping away needed aid from jobless Americans will only exacerbate the pain for groups that have already suffered disproportionately throughout this crisis.