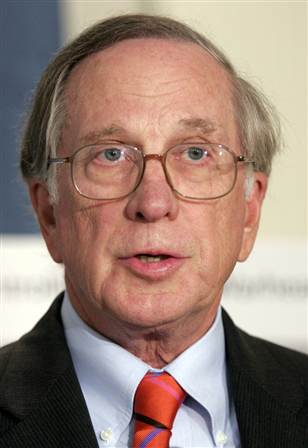 Average compensation per full year of service as director: $274,321

Sam Nunn served as a U.S. Senator from Georgia for 24 years, from 1972 to 1996, during which he served as chairman of the Armed Services Committee and on the Intelligence and Small Business Committees. Before his election to the Senate, Nunn served in the House of Representatives for four years after nearly a decade in the Coast Guard. He received his bachelor’s and law degrees from Emory University.

Since 2001 Nunn has served as Co-Chairman and Chief Executive Officer of the Nuclear Threat Initiative, and since 1999 he has chaired the Center for Strategic and International Studies’ board of trustees. He sits on the steering committee of the “Fix the Debt” campaign led by Erskine Bowles and Alan Simpson.

Nunn has served as a director of the Coca-Cola Company since 1997. During current CEO Muhtar Kent’s five years at the company’s helm, Coca-Cola has performed marginally better than the S&P average. In return Kent received a 62% raise from 2009 to 2012, with last year’s total compensation topping out at over $30 million. Kent’s predecessor, Neville Isdell, was CEO from June 1, 2004 to July 1, 2008, during which time the company performed well below average. Yet for his service as CEO and Chairman of the Board, Isdell’s compensation from 2006 to 2008 totaled $87,554,075. (After resigning as CEO in June 2008, Isdell stayed on as Executive Chairman beyond the end of that fiscal year.) In a proposal to separate the roles of CEO and Chairman in order to improve management oversight, the International Brotherhood of the Teamsters noted that Isdell’s 2008 compensation was three times the average among a peer group of comparable firms.

In April of 2013, Nunn stepped down as a director of General Electric, on whose board he had sat since 1997. For his service to the board over just the past five years (2008-2012), Nunn received over $1.6 million. Meanwhile, GE CEO Jeffrey Immelt has seen his compensation rise by over 275% in the same period, during which time the company has more or less grown at the same rate as the S&P average. In 2006 and 2007, before the market crashed, GE underperformed relative to the S&P. However, after making a reported $17,863,452 in 2006, GE’s board approved a compensation package that brought Immelt $19,591,580 the following year, a 9.7% raise.

Nunn also served as a director of Dell from 1999 to July 2011. The Securities and Exchange Commission (SEC) alleged that from 2001 to 2006, Dell’s executives, including founder and CEO Michael Dell, ran an accounting fraud involving the mischaracterization of payments from Intel. The company agreed to pay $100 million to settle the complaint. . In addition, Mr. Dell personally paid $4 million and the company paid $40 million to settle a class-action lawsuit. The unreported payments for which Dell was reprimanded accounted for 76% of the company’s quarterly operating income at one point, according to the SEC. Nunn was the board’s presiding director for most of the time the fraud was taking place, and he retired less than a year after the SEC fine was handed down. During his tenure as a director of Dell, the company’s stock price fell by around 60%.

From 1997 to 2011 Nunn also served as a director of Chevron, which was ranked third on the Fortune 500 list in 2013. During Nunn’s tenure, the oil company outperformed the S&P average. Nunn retired from the board three months after an Ecuadorian court ordered the company to pay $17 billion to plaintiffs in the country’s Amazon region, a decision Chevron continues to fight.

In August 2012, Nunn was elected as a director of the oil and gas company Hess. Less than 10 months later, he left the company in the wake of a shake-up by activist investors who accused Hess’s board of being too close to the founding family. CEO and (until May 2013) Chairman John Hess is a trustee of the Center for Strategic and International Studies, of which Nunn serves as chairman.