Good afternoon. Thank you for the opportunity to testify in support of SB0605. I am Eileen Appelbaum, Senior Economist at the Center for Economic and Policy Research (CEPR). I formerly held full professor positions at Temple University in Philadelphia, PA and Rutgers University in New Brunswick, NJ. I am the coauthor of P. The book has been reviewed many times and found to be a fair and balanced account of the industry. In August 2016, it was chosen by the prestigious Academy of Management (the professional academic association for business schools and their faculty) as one of the four best books published in the two-year period 2014–2015 and was a finalist for the George R. Terry Book Award.

The private equity business model is illustrated in the figure below. 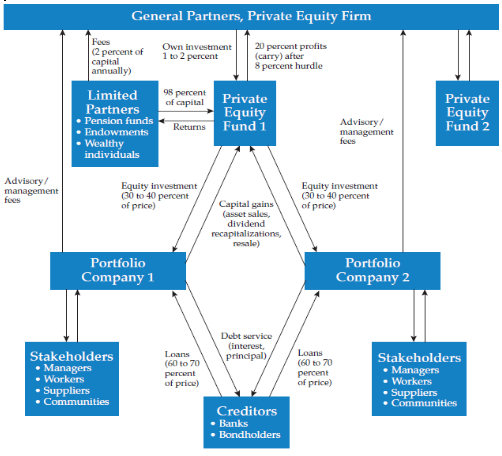 Including a profit share as a form of incentive pay in employee compensation is a fairly common practice in various U.S. industries, not just private equity. The United States Steel Corporation provided employees who held positions of responsibility with a share of the company’s profits as early as 1903. Today, the company’s unionized workforce receives a share of the company’s profits. Earnings of these workers are tied to the performance of the enterprise, and the profit share provides an incentive for employees to focus on helping the business succeed. Performance based pay — whether CEO bonuses, sales commissions of real estate brokers or shoe salesmen, or carried interest — is at-risk pay. It depends on how the enterprise performs and there is no guarantee that it will be forthcoming. In every one of these cases with the exception of carried interest, it is taxed as ordinary income. Carried interest is the private equity version of a performance fee.

In steel, as in all industries where employees receive a profit share or other form of performance pay, such compensation is taxed as income. Steelworkers pay income tax on their share of the company’s profits. In sharp contrast to this, however, carried interest — the profit share or performance fee that private equity fund general partners receive for managing the fund — is treated as a long-term capital gain and taxed at the 20 percent capital gains tax rate rather than the 39.5 percent top income tax rate. There is no economic justification for this anomalous tax treatment of carried interest. It reduces the tax revenue received by the IRS by about $18 billion a year to the disadvantage of the tax-paying public, and it gives a huge boost to the after-tax income of private equity fund general partners. Carried interest is simply incentive compensation and should be taxed as income rather than treated as a capital gain. Passage of SB0605 will repatriate the tax revenue lost because of the federal tax treatment of carried interest to the state of Maryland, and will close this tax loophole, at least for Maryland taxpayers.

While PE partners would be loath to give up their tax break on carried interest, many observers sympathetic to the industry admit that this tax loophole is indefensible and should be eliminated. Carried interest does not represent a return on capital that GPs have invested because nearly all of the capital in the PE fund is put up by the fund’s limited partners. This disparity between GPs’ investments and returns led the industry publication, Private Equity Manager, to conclude that GPs’ disproportionate share of a PE fund’s gains is “more akin to a performance bonus than a capital gain” and to agree with the view “that a GP’s share of profits made on investor capital should be taxed as income, not capital gains.” In January 2016, the editorial board of the Financial Times labelled the carried interest loophole “a tax break that Wall Street cannot defend.” The Financial Times wrote:

“Private equity partners and fund managers do not, for the most part, have their own capital at risk when they make these investments. They are receiving payment for a service, namely to invest money on behalf of limited partners in the fund, while losses on investments fall on their clients alone.”

In calling for legislators in the U.S. and U.K. to tax carried interest as income, which it clearly is, the Financial Times notes that “it is an especially egregious break for the well-off at a time when they should be contributing more, not less.”

The hedge fund business model is very different from the private equity model, but they share some key characteristics. A financial investment firm sponsors a hedge fund that is managed by a general partner who recruits investors for the hedge fund. The fund’s investments are managed by the general partner. The general partner puts up a fraction of the equity in the fund, but collects a disproportionate share of the fund’s profits. It’s a stretch for hedge funds to treat this income as a capital gain since they are mainly managing other people’s money and not investing their own. Instead, this profit share or performance fee should be treated in the tax code as the ordinary income it really is. Unfortunately, as in the case of private equity, this income is characterized as carried interest and treated as a long-term capital gain for tax purposes.

This practice by private equity and hedge funds needs to end.

Leading politicians on both sides of the aisle — Donald Trump and Jeb Bush as well as Hillary Clinton and Bernie Sanders — have called for ending the carried interest tax giveaway. But Washington has been slow to act. States are now gearing up to lead the way. Maryland has an opportunity to close this tax loophole. Passage of SB0605 will require those in the state who receive income that is attributable to investment management services to pay their fair share of taxes. This will provide the state with much needed revenue to fund its priorities — schools, housing, jobs, clean energy, or whatever it chooses. Maryland has the chance to be the leader, but the state is not alone in addressing this issue. Initiatives are underway to close the carried interest tax loophole and legislation has been introduced in New York, New Jersey, Connecticut, Rhode Island, Massachusetts, and Illinois in addition to Maryland. Other states that have expressed interest in pursuing this issue include California, Minnesota, Ohio, Pennsylvania, Virginia and the District of Columbia.

I congratulate you on making this effort to close the carried interest tax loophole, and hope that SB0605 passes in the Senate and sister legislation passes in the House.