Should Pension Funds Be Speculating on Energy Prices with Workers’ Retirement Savings?

The Wall Street Journal reported last Friday that private equity “firms’ stakes in a dozen publicly traded energy exploration-and-production companies have lost more than $18 billion in value since last summer when oil prices began their slide from more than $100 a barrel.” These losses are just the tip of the iceberg. In addition to money-losing investments in publicly-traded companies, private equity funds sponsored by these PE firms have lost money on the privately held energy companies in their portfolios.

Now some of these funds are doubling down on their bets on the energy sector betting on the direction energy prices are likely to go. PE funds have raised hundreds of billions of dollars to make new energy investments—about $150 billion in 2013–2015 alone as the figure below shows—and they need to invest all that dry powder. 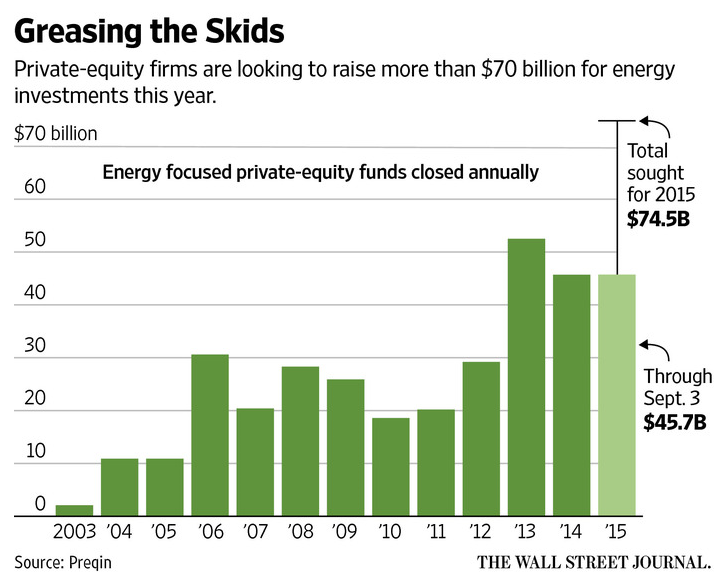 PE firms argue that energy prices are going to rise and investments made now will look good in two or three years. They may be right. But then, who thought a year ago that oil prices would continue to fall and would hover today at around $47 a barrel?

Private equity’s recent history of placing one-way bets on energy prices should serve as a warning. In 2007, a consortium of private equity firms led by KKR’s Millenium Fund and TPG’s Partner V Fund bought out the Texas Utility giant, now Energy Future Holdings (EFH), for $48 billion—the largest LBO in history. They bet that natural gas prices would rise, but instead they tanked. After several rounds of refinancing the $40 billion in debt from the deal, EFH went bankrupt in 2014. But the private equity partners didn’t pay, instead pocketing an estimated $530 million in fees. Meanwhile, the 14 pension funds that invested in the Millenium Fund and the more than 50 that invested in Partner V Fund, along with other limited partners, lost their investments.

Here’s the real question: should PE firms be speculating on the future price of oil with the retirement savings of American workers? Private equity firms, which put up just $1 to $2 dollars for every $100 dollars contributed to the PE fund by pension funds and other investors, are playing with other people’s money. Often, that money comes from workers’ retirement savings. An examination of three PE firms, Quantum Energy Partners, Natural Gas Partners and EnCap Investments, that focus exclusively on energy investments reveals the extent to which PE funds sponsored by these firms are fueled by workers’ retirement savings. According to PitchBook Data, Quantum Energy Partners lists 40 pension funds among its limited partners; Natural Gas Partners lists 54 pension funds; and EnCap Investments lists 43 pension funds. One has to wonder what the El Paso Police and Firemen, the Los Angeles water department employees, or Missouri public school teachers depending on these pension funds for income in their old age would think if they knew about these investments.

No one can object if Wall Street firms speculate on the future of energy prices with their own money. The same cannot be said about pension funds, who have a fiduciary responsibility to be stewards of workers’ retirement savings.