Social Security and the 1 Percent

In February of last year, the Center for American Progress (CAP) released a report titled The Effect of Rising Inequality on Social Security. The report shows how the increase in economic inequality in the U.S. has led to deteriorating Social Security revenues, often to the tune of tens of billions of dollars a year. Earlier research by Dean Baker showed that the upward redistribution of wage income was responsible for 43.5 percent of the projected 75-year shortfall in Social Security funding as of 2013.

Social Security is funded through federal payroll taxes. These taxes are currently applied to the first $118,500 of a worker’s wages; this means that only a portion of high-wage workers’ earnings are subject to taxation. For example, a worker earning $237,000 a year will pay payroll taxes on just half his earnings in 2016; a worker earning a million dollars will pay payroll taxes on less than 12 percent of his earnings. By contrast, any worker making $118,500 or less will have all of his earnings held subject to taxation. This $118,500 “cap” rises in line with average wage growth every year.

In 1983, reforms to the Social Security program set the cap high enough to cover 90 percent of all wage income, in line with the percentage covered during the previous year. However, because the earnings of the highest-wage workers have been rising faster than average earnings, a growing portion of wage income has been escaping taxation. In particular, the top 1 percent of wage earners have seen their share of total earnings nearly double over the last three decades. It’s clear that the growing share of earnings going to the top 1 percent has led to an increase in the share of wage income escaping payroll taxation: 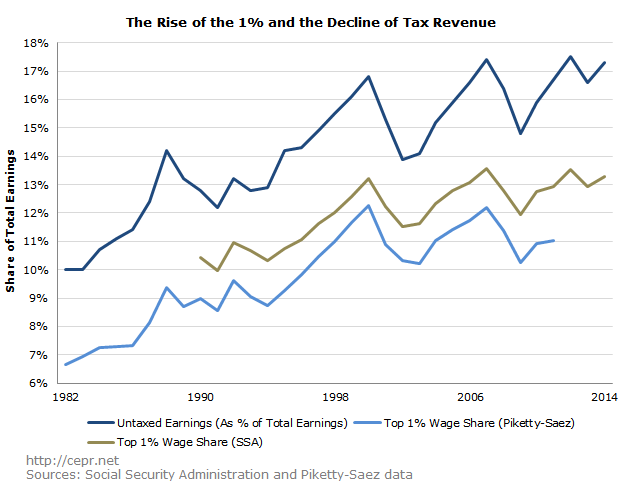