In recent weeks there has been significant discussion about the effects of raising taxes on the rich. Think tanks, government institutions, and media outlets such as the Brookings Institution, the U.S. Treasury Department, the New York Times, the Washington Post, and Vox have all devoted significant coverage to the prospect of raising taxes on wealthy Americans.

Start with state and local taxes. State and local tax codes are often highly regressive because they rely on sales taxes and property taxes for large portions of their revenue. Sales taxes are regressive because poor Americans aren’t savers — they spend essentially all their income, while rich Americans are able to save at far greater rates. Property taxes are also regressive, because even though the rich tend to own more expensive houses than the poor, home values as a share of income tend to decline at higher incomes. Oftentimes the only progressive taxes at the state and local level are state income taxes. The Institute for Taxation and Economic Policy estimates that states and localities tax the bottom 20 percent of income earners on average at a 10.9 percent rate, and the top 1 percent of income earners at just a 5.4 percent rate.

This makes the tax code far less progressive. In 2013, states and localities raised 51 cents in revenue for every $1 in revenue going to the federal government. Overall, 34 percent of total government revenue was raised at the state and local level. This means that while state and local taxation is not as substantial as taxation at the federal level, it is nonetheless a significant part of the overall tax code.

Even if we restrict our analysis to federal taxes, the income tax is only one part of the larger federal tax code. In 2013, the federal income tax generated 47.4 percent of all federal tax revenue, while the federal payroll tax generated 34.2 percent. As with state and local taxes, federal payroll taxes are highly regressive. Payroll taxes only apply to wage income, meaning that capital income (which goes disproportionately to the rich) is excluded from taxation. Moreover, the Social Security payroll tax, which is responsible for over 75 percent of all federal payroll tax revenue, applies only to the first $118,500 of a worker’s earnings. Someone making $500,000 in wages will pay Social Security payroll taxes on less than a quarter of their income, while someone making $30,000 will pay this tax on their entire income. (The payback structure for Social Security is progressive.)

The figure below shows the distribution of tax revenue across all types of taxes. Federal income taxes represent slightly less than one-third of total revenue: 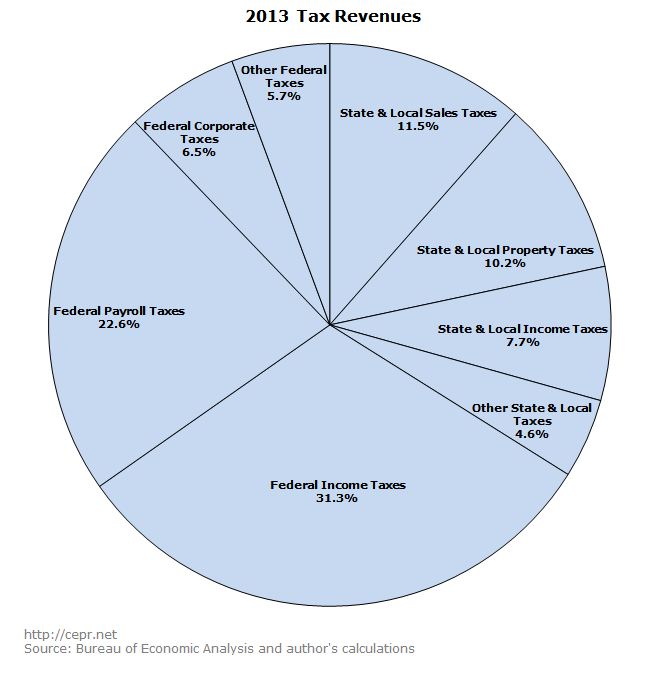 The figure below from Citizens for Tax Justice shows how the overall tax code combining federal, state, and local taxes affects different groups along the income distribution (their 2012 estimates were somewhat bleaker due to the fact that new taxes on wealthier Americans have gone into effect in recent years, including various taxes implemented under the Affordable Care Act): 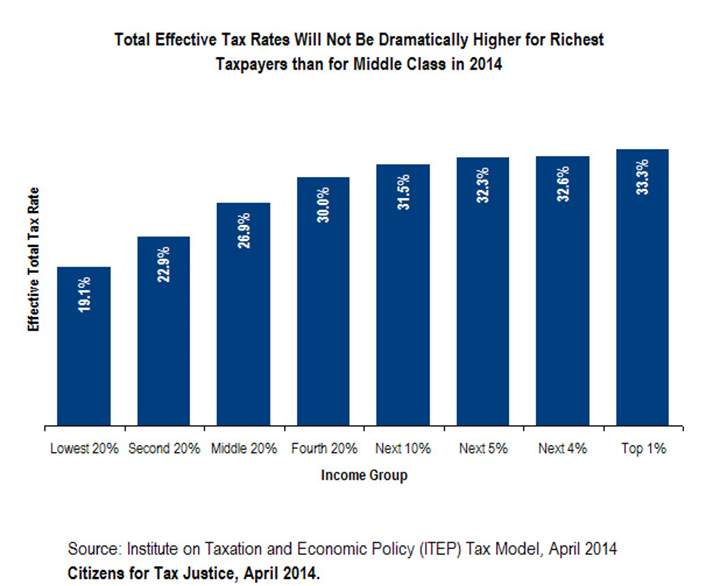 The federal income tax may be highly progressive, but the tax code as a whole is not.