The Culture of Overwork: A Uniquely American Phenomenon

Earlier this year, Heather Boushey and Bridget Ansel of the Washington Center for Equitable Growth released a report titled “Overworked America: The Economic Causes and Consequences of Long Work Hours.” For those who work excessively long hours at their jobs and don’t have time to read the full report, this blog post by the authors succinctly summarizes many of the paper’s key findings.

Boushey and Ansel show that, between 2011 and 2014, a large number of Americans worked beyond the typical 40-hour workweek. (In 2015, exactly 25 percent of the labor force worked 41 or more hours per week.) Moreover, long hours show up predominantly in occupations with significant wage disparities — most notably in legal, management, and finance occupations.

One point that isn’t discussed in the piece is the degree to which other developed countries — many of which, incidentally, have much lower income inequality than the U.S. — have been able to rid themselves of this problem. As productivity rises, countries have the option of improving workers’ well-being not through higher incomes, but rather through greater leisure time. And in general, most countries have opted for a bit of both. Annual incomes have continued rising, but working hours have declined as well.

According to data from the OECD, annual working hours have, in fact, declined in the United States, but only to a minor degree. As shown in the figure below, annual hours per worker declined just 5.2 percent in the U.S. between 1972 and 2014; this was the second-smallest decline among the twenty OECD countries for which we have data. For Sweden, the only country that experienced less of a decline than the U.S., workers on average put in just over 1,600 hours per year, compared to almost 1,800 hours in the U.S.[1] Thirteen of the countries reduced their working hours by 10.5 percent or more, and six countries reduced their hours by over 20 percent. The median and average reductions in the sample were between 16 and 17 percent. 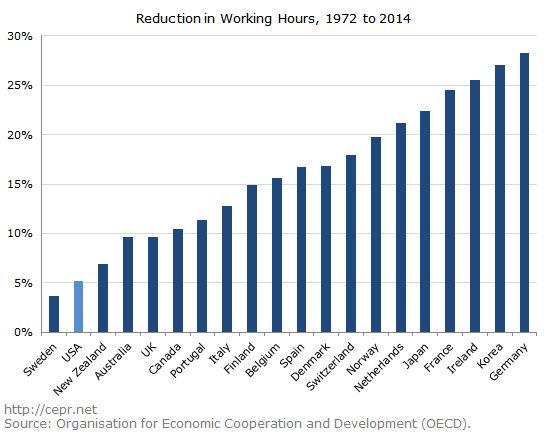 It should be noted that this relatively small decrease has occurred without a serious national conversation about work-life balance. If we want to continue working long hours for the sake of higher pay, we should do so by choice, not because we failed to consider reasonable ways of promoting well-being through greater free time. To that end, Boushey and Ansel have proposed four policy reforms for reducing overwork: covering more workers under the 40-hour-a-week overtime threshold (a policy shift which will actually take place in December of this year); allowing workers to take “comp time” in place of overtime pay; public subsidies and tax credits for childcare and eldercare; and greater enforcement of existing laws on working hours. Shifting health insurance costs away from private employers could also be helpful in reducing average hours. Employer-provided health insurance is a per-worker overhead cost. Firms add to their insurance costs when they hire a new worker but not when they increase the hours of their existing employees. This creates an incentive for employers to demand more and more hours from their current employees rather than 40 new hours from an unemployed jobseeker.

These sorts of policy proposals should form the starting point for a serious discussion on work-life balance in the United States.

[1] Note that estimates of annual working hours aren’t completely comparable across countries. The OECD states: “The concept used is the total number of hours worked over the year divided by the average number of people in employment. The data are intended for comparisons of trends over time; they are unsuitable for comparisons of the level of average annual hours of work for a given year, because of differences in their sources.” Given the estimated gap between the U.S. and Sweden of roughly 180 hours per year, it seems unlikely that the Swedes work more hours than most Americans; still, the gap may not in fact be quite as large as 180 hours.