Vacancies and Rents: A Causal Relationship 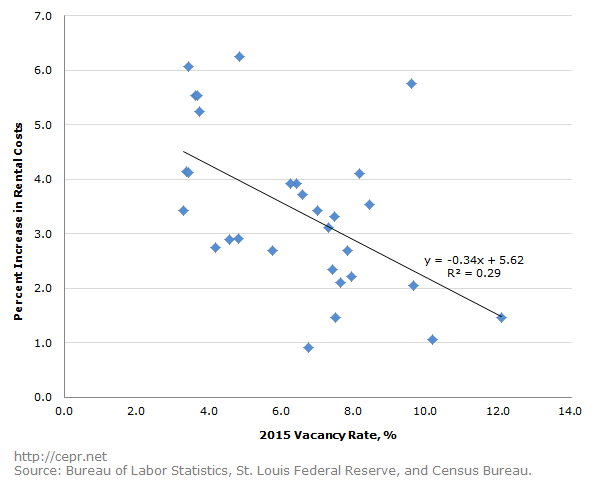 The figure above compares the average 2015 rental vacancy rate with the percent increase in owner’s equivalent rent for 30 metropolitan areas. Although the relationship is imperfect, there is a clear trend to the data: higher vacancy rates are associated with lower inflation. The concept here is relatively simple: when a large number of rentals are vacant, rentiers must set prices relatively low in order to compete for potential renters.

This becomes clear when you look at specific metropolitan areas. The three areas with the highest vacancy rates also happened to have the three lowest inflation rates. Two areas in Ohio — Akron and Cincinnati — had 12.1 and 10.2 percent vacancy rates, respectively. Increases in rents were just 1.5 and 1.1 percent in those two areas, compared to the sample median of 3.4 percent. St. Louis, Missouri had a 9.7 percent vacancy rate — 3 percentage points above the median vacancy rate of 6.7 percent — and saw just a 2.0 percent increase in rental prices.

The metropolitan area encompassing Denver, Colorado saw the greatest increase in rental prices with 6.3 percent inflation. Its vacancy rate of 4.8 percent was far lower than the rates of Akron, Cincinnati, and St. Louis. Overall, three of the four areas with the lowest vacancy rates experienced above-average inflation, with only the area encompassing Los Angeles (3.3 percent vacancy rate, 3.4 percent inflation) seeing a normal price increase. The Boston, Portland, and San Diego metropolitan areas, all of which had a 3.4 percent vacancy rate, saw price increases of 4.1, 6.1, and 4.1 percent, respectively.

This means that rent prices are likely to increase going forward. Since peaking at 11.1 percent in the first quarter of 2009, the average rental vacancy rate has gradually been trending downward. The 2015 average national vacancy rate of 7.1 percent is the lowest rate we have seen in the U.S. since 1985. During the time period in which vacancies have been coming down, rental prices have been going up. If vacancies continue on their ever-decreasing path, we should expect to see greater increases in rents going forward.