As the House-Senate conference committee prepares to meet to negotiate the 2014 budget on Wednesday, avoiding $109 billion in crude sequestration spending cuts seem to be a top priority.

Simply repealing sequestration would be good for the economy, as “lowering the budget deficit right now leads to slower growth“, but the current political situation is demanding that the cuts be replaced with other savings or revenues.

An untapped source of user fees is financial trading.  Currently, the Securities and Exchange Commission’s annual budget of about $1.7 billion is funded by a fee of less than 2 cents per every $1000 of stock transactions.  If that fee were raised to 30 cents per $1000, on a wider range of Wall Street trades, Congress’ Joint Committee on Taxation estimates that it would raise about $39 billion per year. 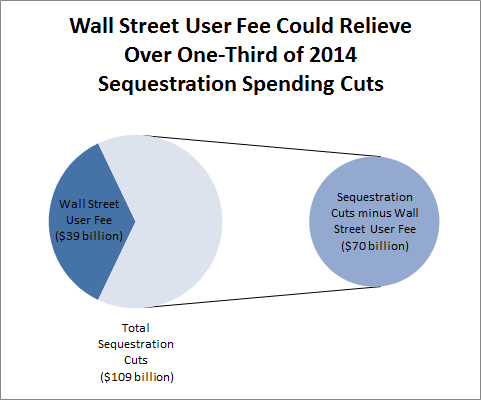 That’s over one-third of the 2014 sequestration cuts.  As an added bonus, a Wall Street fee would affect middle-class families less than many other user fees, as the vast majority of financial speculation is being done by extremely wealthy traders.  While the options for a budget agreement seem to narrow, a workable idea like a Wall Street user fee deserves serious consideration.