The folks who are opposed to actions to slow global warming act like believing in global warming is optional, in the same way that we might think that enjoying baseball is optional. Of course, people can believe whatever they want, but the fact is that the planet is getting warmer, and we stand to get screwed in a thousand different ways if we don’t take steps to stop it.

And, nothing changes in this story by people opting not to believe in global warming. Their beliefs are not going to help the billions of people who will suffer the consequences in the decades ahead, just like it doesn’t help a shooting victim if the guy pulling the trigger doesn’t believe that bullets hurt people.

Apart from the question of whether the pipeline is really needed, there is also the problem that Lake Powell doesn’t have the water. Even without the pipeline draining more than 80,000 acre-feet of water a year, the lake is already approaching the critical level at which point the Glen Canyon dam will no longer be able to supply power to 5 million people in the Southwest. 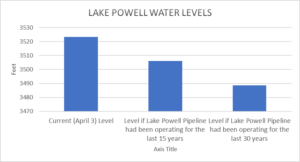 Incredibly, our antienvironmentalists are still pushing for the pipeline spending, millions of dollars on planning and studies. It’s hard to imagine a worse use of money, except for actually building the pipeline.

The reality is that because of global warming, we are seeing much less rain and snowfall in the area than in prior decades. There is no reason to think this picture will get better in the years ahead. That means we will have problems maintaining energy production from the dam even without the LPP. If we were to build the LPP, we would very quickly need another energy source for 5 million people in the area.

But, the antienvironmentalists are like little kids. They have to be humored with the idea that we could build the LPP, even though it makes no sense. So, we will spend millions more doing pointless analyses of the LPP’s costs and benefits, even when its obvious that costs swamp the benefits, since the water simply is not there.

It is expensive to have a large segment of the population living in Never-Never Land.