The November jobs report left a number of people, including me, somewhat confused. The data from the survey of households was great. The unemployment rate fell by 0.4 percentage points to 4.2 percent, with over 1.1 million more people reporting that they were employed. This was far better than the consensus forecast, which put the drop at 0.1-0.2 percentage points. (My number was 4.3 percent.)

While the data in the household survey were much better than expected, the 210,000 jobs reported by the establishment survey was well below expectations, and the focus of most media coverage. There are several points to consider in assessing this number.

First, the prior two months’ data were revised up by a total of 82,000 jobs. This means the story on where we stand in November in regaining jobs is somewhat better than the 210,000 figure indicates. Also, the prior months’ data have all been subject to large upward revisions. This could mean we are looking at a much higher jobs growth figure for November when these data are revised.

The second point is that the public sector is continuing to lose jobs, shedding another 25,000 in November. This puts private sector job growth at 235,000. If the public sector had instead say gained back 50,000 of the more than 900,000 jobs it lost in the pandemic, we would have been looking at job growth of 285,000. (I have explained before that the issue holding back public sector hiring is that it is difficult for state and local governments to offer higher pay and hiring bonuses to compete with private employers.)

My assumption is that employers who are unable to attract workers are responding by increasing the hours of their current workforce. This fits with the story of rapid wage increases for lower-end workers and also the high number of quits and job openings being reported in recent months.

Okay, but enough with the data, let’s get to the Biden versus Trump comparison. I know that this comparison is silly since so many factors affect job growth that are beyond the president’s control. But, everyone knows that if the situation were reversed, Donald Trump and his crew would be touting the comparison in every forum they had. I’m doing this for them. As it now stands President Biden has created 5,875,000 jobs in his first ten months in the White House, compared to a loss of 2,876,000 jobs in the four years of Donald Trump’s presidency. 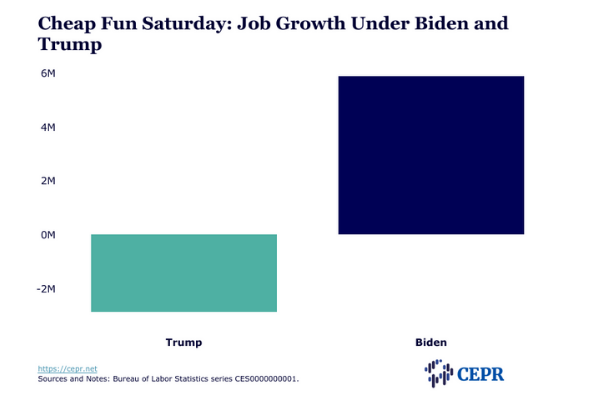