The December job report again showed an extraordinary divergence between the establishment survey and the household survey. The establishment survey showed the economy creating just 199,000 jobs, while the household survey showed a growth in employment of 651,000, pushing the unemployment rate down by 0.3 percentage points to 3.9 percent, a level achieved at few points in the last fifty years.

It’s not unusual for there to be substantial differences between the surveys, but these are extraordinary. In the last months, the household survey has shown an increase in employment of 1,741,000. By comparison, the increase in jobs in the establishment survey has been just 448,000.

While these divergences are striking, they largely disappear if we look over a longer period. Over the last year, the household survey shows employment is up by 6,092,000. The establishment survey shows a gain of 6,448,000 jobs.

Long and short, there is nothing obviously wrong in the household data, so we should feel free to celebrate the extraordinarily low unemployment rate we are now seeing. Also, as I pointed out last month, the establishment data has consistently been revised up in recent months. In yesterday’s report, the job numbers for the prior two months were revised up by a total of 141,000, so it is likely that we will see an upward revision to the December data in the next two reports.

The other point is that it is clear that the constraint on employment is largely on the supply side at this point. Many employers, particularly those in low-paying sectors, are having trouble attracting workers. We see evidence of this in both the increase in the length of the average workweek and also rapidly rising wages. Also, we know from the Job Openings and Labor Turnover Survey that job openings are at record highs. So this is clearly a very good labor market from the standpoint of workers.

Okay, but enough with the data. Let’s get to the Biden versus Trump comparison. I know that this comparison is silly since so many factors affect job growth that are beyond the president’s control. But, everyone knows that if the situation were reversed, Donald Trump and his crew would be all over Fox and everywhere else touting the comparison. I’m doing this for them. As it now stands, President Biden has created 6,215,000 jobs in his first eleven months in the White House, compared to a loss of 2,876,000 jobs in the four years of Donald Trump’s presidency. 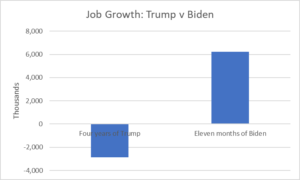