China is the World’s Largest Economy: Get Over It

It is common for politicians and pundit types to speculate on when or whether China’s economy will pass the US economy as the world’s largest. The latest episode to cross my path was a column by David Wallace in the New York Times.

There is little reason for this sort of speculation. China is already the world’s largest economy, its economy is more than 20 percent larger than the US economy, according to the IMF. Furthermore, it is growing considerably more rapidly (assuming they don’t continue their zero COVID-19 policy forever), so it is projected to be more than a third larger than the US economy by the end of the decade. 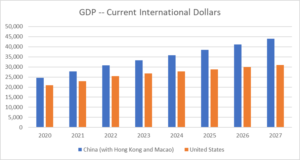 Many people misunderstand the relative sizes of the two economies because they rely on exchange rate measures of GDP. These measures a country’s GDP and then compare it to the US GDP by converting its currency into dollars at the current exchange rate.

Most economists argue that a purchasing power parity measure of GDP is superior. This applies a common set of prices to the goods and services produced in different countries. Any measure like this will always be inaccurate, but in principle it is comparing apples to apples. We assume that tables sell for $500 everywhere, that shoes sell for $60, etc.

Using the purchasing power parity measure, China’s GDP passed the US GDP around 2014. Since then it has made the gap larger.

Some folks seem to find it hard to accept that the US does not have the world’s largest economy, but such is life. Donald Trump lost the election and the US is number 2.