While the Congressional Budget Office’s (CBO) projections of the impact of the Affordable Care Act got the most attention after the release of its new Budget and Economic Outlook, CBO also implicitly raised its estimate of the cost of the crisis created by the collapse of the housing bubble by $1.4 trillion. This is due to the fact that it downgraded its growth projections for later in the decade, for reasons unrelated to the ACA, with the view that more of the impact of the downturn will be enduring long into the future.

The figure below shows the difference between the 2008 projections for annual GDP and the projections from both the 2013 Outlook and the 2014 Outlook. The calculations use CBO’s Long-Term Budget Projections for years beyond the budget horizon. The 2014 projections for GDP are adjusted upward for the negative impact that CBO expects the ACA to have on GDP. The 2014 figure is accordingly raised by 0.5 percent from the CBO projection, the 2015 figure is raised by 0.75 percent, and subsequent years by 1.0 percent. (In effect, these projections assume that policy changes other than the ACA have had a neutral effect on growth.)

The cumulative cost of the collapse through the 2024 budget horizon, measured as a gap between projected output in 2008 and the most recent projections, is now $24.6 trillion, as shown below. This is equal to $80,000 for every person in the United States. 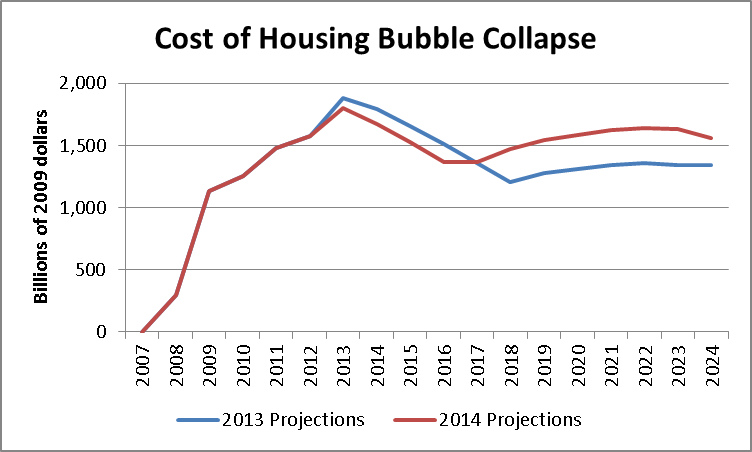