Contrary to What the NYT Tells You, the Problem in An Aging Society is Distribution

The New York Times had a major article reporting on how many people in South Korea, Hong Kong, and Japan are being forced to work well into their seventies because they lack sufficient income to retire. The piece presents this as a problem of aging societies, which will soon hit the United States and other rich countries with declining birth rates and limited immigration.

While the plight of the older workers discussed in the article is a real problem, the cause is not the aging of the population. The reason these people don’t have adequate income to retire is a political decision about the distribution of income.

If the issue was simply that too few people were working in these aging societies, we should expect to see slower per capita growth than in countries where aging is less of a problem. That is not the case. The figure below shows real per capita income in these three countries from 2014, along with projections to 2027, as well as France, which has maintained a relatively high birth rate. 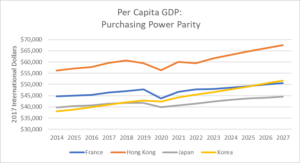 The conventional story of a country facing problems due to aging would be that it stops seeing per capita income growth, and could even see declines, as the ratio of workers to total population falls. Two of the three countries highlighted are sustaining considerably more rapid per capita growth than a country that is less affected by an aging population. In the third case, the growth is essentially identical.

This means that the reason older people are unable to retire in these countries is not the aging of the population, but the political decision to not provide adequate support for the elderly population. In short, the problem is political, not demographics.