Declining Rate of Unemployment Insurance: Many Workers are Unemployed Too Long to Receive Help

Last summer the Center for American Progress released a report on the problems with the Unemployment Insurance (UI) system in the United States. They cited, among other things, the historically low number of jobless workers who received UI benefits in 2015 – just 27 percent. The two main criteria that determine a worker’s eligibility for benefits are the duration of their unemployment (most states cap UI at 26 weeks) and that they lost their job involuntarily[1].

However, during severe recessions, workers may be unemployed for much longer than 26 weeks, as was the case in the recent downturn. An analysis of trends in unemployment shows that long-term unemployment is one of the main reasons for the decrease in the percentage of the unemployed receiving benefits.

A decrease in the two main eligibility factors beginning in 2008 and running through 2016 suggests that UI eligibility is one of the primary reasons for low UI participation. With only 37 percent of unemployed workers meeting the two main criteria, that ratio is lower than it has been at any point since the 1970s: 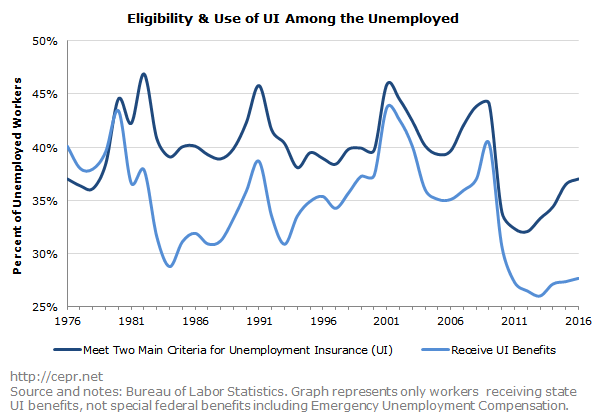 Although the percentage of unemployed workers who lost their jobs involuntarily did spike in response to the recession, it recovered only a touch slower than following prior recessions. Currently, involuntary job-loss is only slightly below the average from the 31 years prior to the recession. On average, between 1976 and 2007, 49.4 percent of all unemployed workers were out of work due to involuntary job loss; in 2016, that rate was only slightly lower at 48.3 percent. Therefore, today’s low layoffs and discharges rate does not appear to have had a particularly strong effect on the share of unemployed workers eligible for UI. 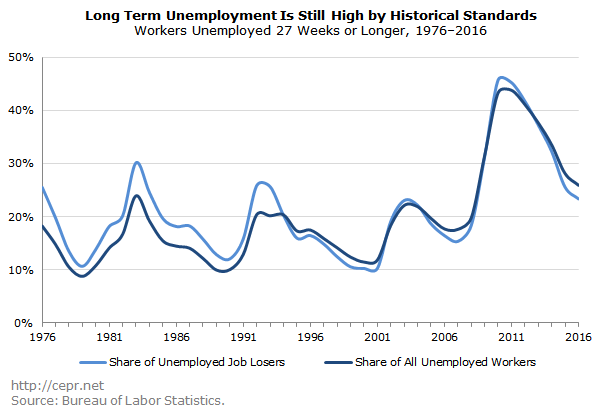 Emergency Unemployment Compensation, created in 2008 in response to the recession, offered additional weeks of federal unemployment benefits for workers who had exhausted their state unemployment insurance. However, the program expired at the end of 2013 and was not renewed by Congress. On top of that, nine states have since cut the number of weeks for which workers may receive benefits. As a result, the unusually large numbers of long-term unemployed are unable to receive help.

[2] The share of the unemployed who have been out of work less than 27 weeks approximates the eligibility cutoff but does not capture it exactly. For example, if a worker is unemployed for two weeks before they begin receiving benefits, they will still be receiving those benefits during their 27th and 28th weeks of unemployment.