With the Republicans having just passed a $1.5 trillion tax cut, the bulk of which goes to the richest one percent, it was inevitable that the generational warriors would come out of the woodwork and resume the attack on Social Security and Medicare. Generational warriors try to divert attention away from how our economy has redistributed income upwards over the last four decades, and convince a large portion of today’s workers that their real problems stem from their parents’ and grandparents’ overly generous retirement benefits.

The opening shot in this new round of generational warfare showed up earlier this month in The Atlantic Magazine. It told the classic story about how seniors are getting too much money back from Social Security and Medicare, the same thing we’ve been seeing for decades. (There is little expectation of originality if you’re in the business of promoting generational warfare.)

In fact, middle-income seniors will get somewhat less back from Social Security than they paid into the system. The cost of Medicare benefits does exceed their taxes, but this is because Americans pay twice as much for our doctors, drugs, medical equipment and other health care items than people in other wealthy countries.

The real problem is high-income people in the health care sector making too much money, not the country being too generous to its seniors. But, the folks promoting generational warfare aren’t interested in clamping down on the rich doctors and drug companies; they want us to go after retired school teachers and retail clerks.

Even if Social Security and Medicare were more generous, it would still say almost nothing about generational equity. While the generational warriors would like to have everyone focus on the cost of programs that primarily serve the elderly, paying for these programs has a trivial impact on the well-being of the working population. Policies that affect the distribution of income within generations are vastly more important.

To make this point as simple as possible, suppose that we had a huge increase in payroll taxes to cover projected shortfalls in Social Security and Medicare. Imagine a combined increase of 4.0 percentage points, which would be more than sufficient to leave both programs fully funded throughout their 75-year planning horizon. 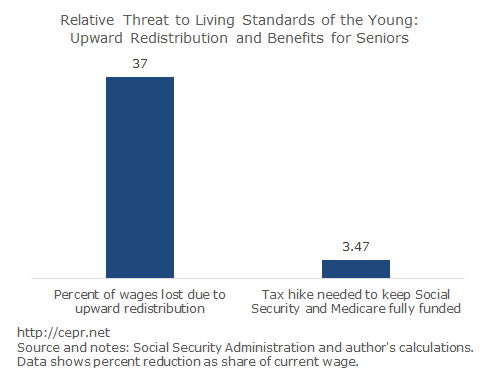 This would undoubtedly be a big hit to working people who have to pay this tax. But, let’s compare this to the upward redistribution of income over the last four decades. This has primarily been an upward redistribution within the wage distribution, from ordinary workers to CEOs, Wall Street trader-types, and highly paid professionals like doctors and dentists. In the last decade there has also been a substantial redistribution from wages to profits.

The result of this upward redistribution has carved a large gap between productivity growth and wage growth. The hourly pay of a typical worker has risen by roughly 6.0 percent from 1979 to 2017. Even if we take a broader measure of compensation that includes health care and other benefits, the increase would be less than 20 percent.

By comparison, productivity has risen by more than 60 percent, even after making adjustments for technical factors like differences in deflators and net versus gross measures of output. This means that the upward redistribution over this period has reduced wage growth by more than 40 percentage points. In short, our children are 40 percent poorer than they would otherwise be because of the money going to people like Bill Gates and Steve Zuckerberg rather than ordinary workers.

So by very conservative estimates, a typical person in their twenties or thirties has seen their income reduced by more than 40 percent because of all the money redistributed to those at the top. However, the generational warriors want young people to be upset about the possibility that a bit more than one-tenth of this amount could be used to pay for their parents’ and their own Social Security and Medicare. (This upward redistribution is also responsible for about half of the projected shortfall in Social Security, as more income going to profits and high-income workers escapes the Social Security tax.)

It is also important to understand that government action was at the center of this upward redistribution. Without government-granted patent monopolies for Windows and other Microsoft software, Bill Gates would probably still be working for a living.

We spent over $450 billion on prescription drugs in 2017. Without government-granted patent monopolies we would probably have spent less than $80 billion. The difference of $370 billion is equal to an increase of a 5.0 percentage point increase in the Social Security payroll tax. But the generational warriors don’t want anyone talking about how much money our children to pay drug companies with government-granted patent monopolies.

In fact, the generational warriors have directly cost our children more than 10 percent of their paychecks with their harebrained fiscal policies. They insisted on a smaller stimulus and austerity following the collapse of the housing bubble in 2007 to2009. This slowed the recovery, reducing both employment and investment, leaving the economy permanently poorer.

But no, we’re not supposed to talk about any of the items that will hurt the living standards of our children and grandchildren. The generational warriors insist that our children’s problem is their parents’ Social Security and Medicare. Their argument doesn’t make much sense, but you can get lots of money for saying it, and you can count on getting your stale recycled arguments printed in the nation’s leading publications.