By Dean Baker and Lara Merling

There have been several efforts by the media and various organizations funded by the Peter G. Peterson Foundation to highlight projected shortfalls in the Social Security trust fund in the context of the presidential campaign. They have argued that candidates should be proposing plans to deal with these shortfalls and in particular that these plans should include cuts to Social Security. Implicitly, or sometimes explicitly, they have argued that the projected tax increases needed to maintain full funding for the program would be too large a burden on taxpayers and the economy.

In this context, it is worth remembering that the economy’s output has fallen sharply relative to the levels projected before the downturn in 2008–2009. If the economy had grown as was projected by the Congressional Budget Office in 2008, it would be more than 10.5 percent larger (almost $2 trillion) than it is today. This lost output comes to more than $6,200 per person for every man, women, and child in the country.

The exact cause of this loss in output is not easy to determine. Usually the economy bounces back from a recession and more or less returns to its trend path of growth. That didn’t happen with this recession. A main reason it didn’t bounce back is that there was no source of demand to replace the demand generated by the housing bubble. The bubble led to a massive boom in construction. It also caused consumption to jump as people spent based on their bubble generated housing wealth.

When these sources of demand disappeared with the collapse of the bubble, there was nothing in the private sector to replace them. Of course, the government could fill this gap with additional spending, which President Obama did to some extent with his 2009 stimulus package. However, the stimulus was quickly curtailed after the Republicans gained control of the House of Representatives in 2010.

The Republicans demanded the deficit be brought down quickly. They had many allies in this area, most notably the various advocates of “fiscal responsibility” funded by Peter Peterson, the Wall Street private equity billionaire. The Washington Post also eagerly pushed for measures to bring the deficit under control. This was at a time when we had massive unemployment, and extraordinarily low interest rates and inflation.

The result was that growth slowed sharply and there was no bounce back from the recession. Growth since 2011 has averaged just 2.0 percent. This is almost certainly below the economy’s potential growth path, meaning that it has made back none of the ground loss during the recession. This is why the economy is so far below the levels of output projected for 2016 back in 2008.

At this point it is not clear how much of the lost ground we can make back versus how much is permanently lost. We will not be able to make up the productivity gains from capital investment that didn’t take place due to the fact that deficit reduction depressed growth. Also, some of the people who ended up among the long-term unemployed as a result of the weak labor market have left the labor market and may never return.

In any case, the austerity pushed by these people has imposed an enormous burden on the economy both in the present and likely long into the future. In fact, we can think of this burden as being similar to a tax. It is standard in Washington political circles to jump up and down and yell and scream over even the most minor tax burden, but fans of arithmetic everywhere know that people care about their after-tax income, not just their tax burden. Except for the arithmetically impaired or the insanely ideological, it would be much better to pay an additional 1.0 percentage point of income in taxes and have a 10 percent higher before tax income, then the leave your tax burden and income unchanged.

For this reason, we can think of the income lost due to the downturn and the Washington Post-Peter Peterson austerity as being like a tax. The only difference is that instead of pulling money out of our paychecks, the Washington Post-Peter Peterson austerity tax prevented money from going into our paychecks. And this was quite a whopper of a tax hike.

The figure below compares the size of the Washington Post-Peter Peterson austerity tax with the tax increase that is projected to be necessary to keep Social Security fully funded over its 75-year planning horizon. 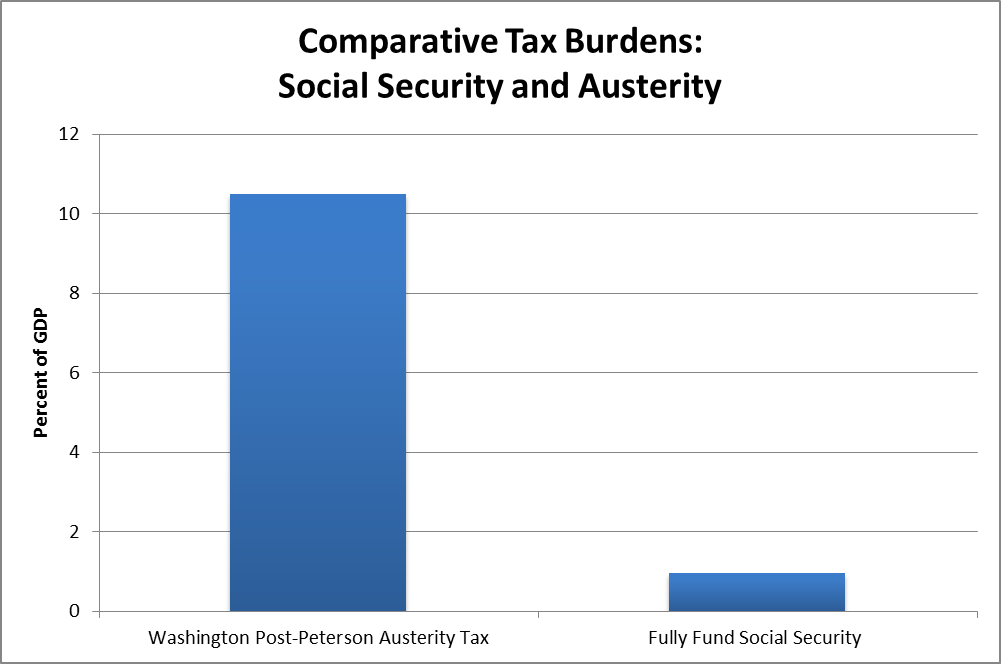 According to the most recent Social Security trustees report, it would take a tax increase equal to 0.95 percent of GDP to fully fund the Social Security program for its 75-year planning horizon. This is less than one-tenth of the burden workers are experiencing in the form of lost wages as a result of the Washington Post-Peter Peterson austerity tax. While the amount of additional tax revenue needed to keep Social Security fully funded is not trivial, it is remarkable that the media have been willing to largely ignore austerity policies that have far more impact on workers’ after-tax income.

The Washington Post-Peter Peterson crew argues that it would be a great thing if cuts to Social Security eliminated or reduced the need for additional tax revenue to finance the program. They do their best to hide the fact that their policies have cost workers more than ten times as much money, but at least they aren’t paying higher taxes.