The evidence continues to grow that inflation is now slowing to a pace consistent with the Fed’s 2.0 percent inflation target. The October Consumer Price Index showed inflation overall was 0.4 percent and 0.3 percent in the core index. These figures are still considerably higher than what would be consistent with the Fed’s 2.0 percent target, but they were lower than generally expected.

Most importantly, the direction of change is clearly downward, with the annual rate of inflation over the last three months coming to 2.4 percent in the overall CPI and 5.1 percent in the core index. The latter still would be very worrying except, that it is driven largely by rent, which accounts for almost 40 percent of the core index.

We know that the rate of rental inflation is slowing sharply. There are a number of private indexes that track the rents of units that come up on the market, as opposed to the CPI, which measures the changes in rent for all units. These private indexes all show a sharp slowing in rent increases, with the most recent data possibly even indicating declining rents.

In any case, we know that in 2023, rental inflation in the CPI will be far lower than what we are seeing now. Slower rental inflation will go far towards moving us towards the Fed’s target.

We also got more good news on inflation this week with the release of data on producer prices and import prices. Both provide more evidence that inflation is likely to slow further in the rest of 2022 and the first months of 2023.

The Producer Price Index, which measures wholesale prices at various stages of the production process, has been showing a sharp slowing of inflation. The chart below shows the annualized rate of inflation over the prior three months for the core final demand index (excluding food and energy), which measures the price of goods and services at the last stage of the production process before retail. 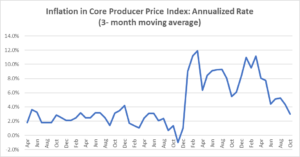 As can be seen, this measure showed an inflation rate of more than 11.0 percent at the end of 2021. It slowed sharply over the course of this year, and it was now just 3.0 percent for the three-month period ending in October. This is lower than peak periods in the years before the pandemic, when inflation was below the Fed’s 2.0 percent target.

The picture in the import price index provides even better news on disinflation. 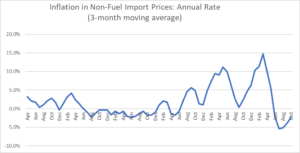 This turnaround in import prices will have a large effect on inflation in the months ahead. Non-fuel imports are equal to more than 14 percent of GDP. They include both inputs of parts and materials and final products like clothes and appliances. It makes a huge difference if the price of imports is rising at a double-digit rate, as was the case at the start of the year, or falling at a single digit rate, as is now the case.

We continue to see evidence that inflation is slowing sharply, from slower wage growth, to sharply lower rental inflation, and falling import prices. It will be some months before the impact of these changes are fully reflected in consumer prices, but we can be fairly certain that it will be showing up in the not distant future.