Since the NYT is doing Reinhart and Rogoff 24-7, I suppose BTP should follow suit. One point that some of us keep making that continually disappears into the ether (as opposed to eliciting a response from our Harvard duo or their accomplices) is that rather than being high, the interest burden of the debt is near post-war lows. It is currently less than 1.5 percent of GDP. In fact, it is less than 1.0 percent of GDP if we subtract the $80 billion that the Fed refunds to the Treasury from the assets it is holding. This means that rather than being an extraordinary burden right now, the debt is actually a very low burden.

Insofar as this point draws a response, it is generally that interest rates will rise in the future as the economy recovers. That may well be true, but we will have contracted large amounts of debt at very low interest rates. This means that even in a story where the Fed does raise interest rates as the economy recovers, the interest burden will just be rising back to levels we have seen before. In fact, in the Congressional Budget Office’s projections we will not get back to the early 1990s interest burden of more than 3.0 percent of GDP until 2021. It is also worth remembering that this interest burden did not prevent the United States from having strong growth through the decade of the 1990s.

Again, the interest burden can be lowered by more than half of a percentage point of GDP if the Fed continues to hold assets, refunding the interest to the Treasury. This would require an alternative mechanism for restricting the money supply, specifically raising reserve requirements. While there are reasons for not wanting to go this route, given the large potential savings to the government (@ $80-$100 billion a year), it is an option for budget savings that Congress certainly should be considering. 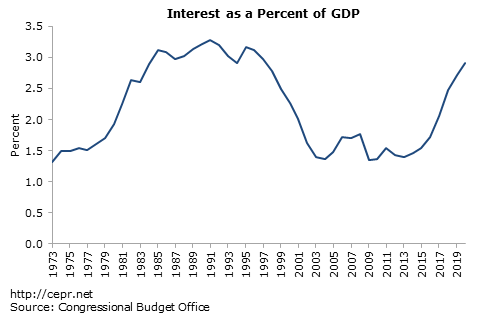 The obvious point about debt burdens that the Reinhart and Rogoffs of the world refuse to address is that the value of debt changes in response to changes in interest rates. Specifically, the price of long-term bonds issued at today’s low interest rates will fall sharply if interest rates rise, as is predicted. This means that if there is some growth curse associated with crossing their 90 percent debt-to-GDP threshold then we can just buy back these bonds at much lower prices when interest rates rise and cut hundreds of billions, if not trillions, off the value of the debt.

This would of course leave our interest burden unchanged, so there would be no point in carrying through this exercise in the real world. But this sort of debt management would have enormous payoffs to those who accept the Reinhart-Rogoff cliff. As I have also argued endlessly, we could do large asset sales as well to reduce the debt burden. For believers in the Reinhart-Rogoff cliff, selling off assets to get the debt-to-GDP ratio down would be great policy since only debt affects growth in their calculations.

Reinhart-Rogoff write as though they have been unfairly treated in the public debates since their spreadsheet error was exposed. Given the poor quality of their analysis and the harm it has done to people across the planet, they have gotten off easy.