Mnuchin Is Not Wrong: Secular Stagnation and the Value of the Dollar

A couple of days ago, Treasury Secretary Steven Mnuchin touched off a firestorm by saying something that is obviously true. He said that a lower-valued dollar would reduce the trade deficit.

As I pointed out yesterday, this is based on the radical concept of downward sloping demand curves. The idea is that when the dollar falls in value relative to other currencies, it makes goods and services produced in the United States cheaper for people living in other countries. This means that they will buy more of our exports.

With fewer imports and more exports, we have a smaller trade deficit. It’s all pretty straightforward. But for some reason, Mnuchin’s comments prompted widespread outrage, with former Treasury Secretary Larry Summers leading the charge.

For the most part, the complaints don’t make much sense (yeah, a lower-valued dollar raises the price of imports — that’s the point), but one of the central lines seems to be the idea that the Treasury Secretary is not supposed to try to talk down the value of the dollar. I’m not sure where that appears in the Constitution, but others have violated this sacred principle.

For example, Lloyd Bentsen, one of Summers’ predecessors as Treasury Secretary in the Clinton administration, quite openly suggested that the US would benefit from a lower-valued dollar. Going back a little further, James Baker, who was Treasury Secretary during the Reagan administration, negotiated a decline in the value of the dollar with our major trading partners in the 1985 Plaza Accord. In short, the idea that the Treasury secretary has some obligation to blather about the virtues of a “strong dollar” has no basis in either economics or history.

But is worth taking this a step further. We saw a massive increase in the trade deficit in the last decade which eventually peaked at almost 6.0 percent of GDP in 2005 and 2006. This led to the loss of millions of manufacturing jobs, decimating communities in places like Pennsylvania and Ohio.

The biggest part of this story was the over-valued dollar. Most immediately, China was the culprit, as it deliberately propped up the value of the dollar in order to boost its exports. China’s current account surplus eventually peaked at an incredible 9.9 percent of GDP in 2007 (that would be $1.9 trillion in today’s economy in the United States).

But the over-valuation of the dollar goes back further. The problem really begins with Summers’ immediate predecessor Robert Rubin, who reversed Bentsen’s policy and continually asserted that the United States wants a strong dollar. He put muscle behind his words in his engineering of the IMF bailout from the East Asian financial crisis in 1997.

The IMF imposed harsh terms on the crisis countries, insisting that debts be repaid in full. In order to do this, these countries had to run large trade surpluses, which meant lowering the value of their currencies.

It was not just the crisis countries that went this route. The rest of the developing world saw the harsh terms imposed on the East Asian countries. In order to avoid ever being in the same situation, they began to accumulate massive amounts of reserves, which meant depressing the values of their currencies so they also run large trade surpluses. (China is in this group of countries. Its trade surpluses were modest in the 1980s and 1990s in spite of growth that averaged close to 10 percent of GDP.)

This switch by developing countries from running trade deficits (which is the textbook story — poor countries are supposed to import capital) to running trade surpluses, was the cause of the enormous imbalances in the world economy over the last two decades. In the early part of the last decade, it was common for folks like Ben Bernanke to complain about the worldwide “savings glut.” Following the Great Recession, this shortfall in demand became known as “secular stagnation.”

This meant there was not enough demand in the world economy. (We filled the demand gap here with the housing bubble until it burst.) Suppose that the developing world had continued to be big importers of capital instead of exporters. The US deficit might have been something closer to 1.0 percent of GDP (the pre-Rubin level).

We would have had a very different economy in 2004–2007 if the trade deficit was 1.0 percent of GDP instead of being close to 6.0 percent of GDP. We would even have a different economy today. The trade deficit would be $380 billion smaller with the bulk of this decline being in the form of manufactured goods, which would mean at least 1 million more manufacturing jobs.

All of this is to say that a “strong dollar” is not just a stupid talking point. It is a really big deal with enormous economic consequences for the US and world economy. And those consequences have been very bad for large segments of the US population. Those responsible still have not owned up to this fact. (I’ll also add the little tidbit that the fact our manufacturing workers have to compete with labor in the developing world and our doctors don’t is by design, not a fact of nature. This is yet another reason why those harmed by the high dollar have reason to complain.)

I will also take this opportunity to counter a piece of nonsense often used to justify the huge trade deficits in the United States. It is sometimes claimed that although these trade deficits hurt workers in the United States, they helped the much poorer workers in the developing world, therefore they were a net good for the world. This is what is known in economics as a “lie.”

There is no reason that developing countries cannot grow while running trade deficits. That is, in fact, the textbook story of how they are supposed to grow. And it’s not just a textbook story. The countries of East Asia were growing much more rapidly in the 1990s when they were running large trade deficits than in the subsequent years when they ran trade surpluses. Here’s the per capita GDP they would have had in 2016 if they continued on their 1990s growth path compared with their actual levels. 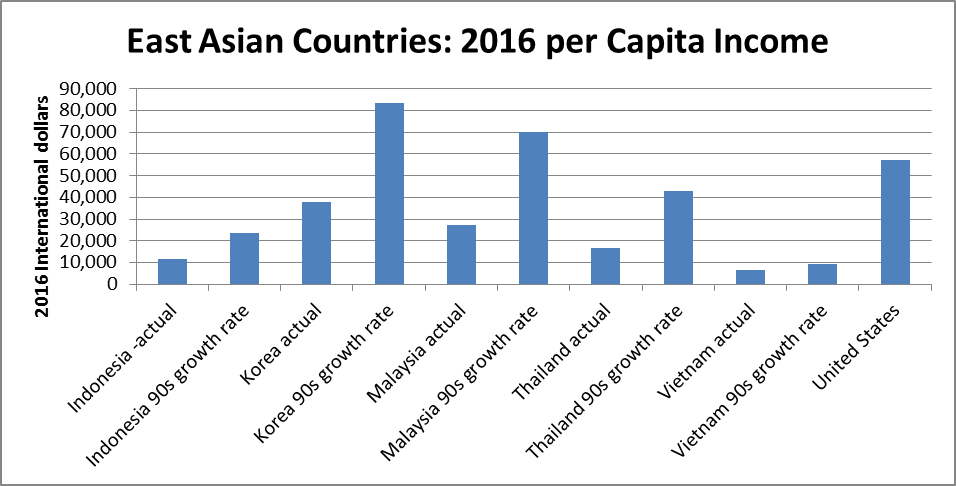 As can be seen, South Korea and Malaysia would actually have higher per capita GDPs than the United States if they continued their growth path from 1990 up to the financial crisis in 1997.

In short, Mnuchin was on the money in his comments about the dollar. His critics are either ignorant or dishonest. There are plenty of opportunities to attack the Trump Administration; this should not be one of them.