Okay, that’s not exactly right, the headline was “U.S. National Debt Tops $31 Trillion for the First Time.” This was a bit weird for two reasons. First, $31 trillion, like $31.1 trillion, is not some nice round number that provides an obvious benchmark.

The other reason the headline was odd was the use of the expression “for the first time.” Our debt has been consistently rising for more than two decades. In fact, except for short period at the end of the last century and start of this century, it has been rising consistently for a half century.

This means that every debt number we hit will be “for the first time.” It’s sort of like the tree in my backyard being taller than it ever was before. That will always be true, not the sort of thing you would typically put in a headline.

In short, the New York Times took a non-event and decided that it was a good occasion to get its readers to worry about the national debt. That’s the sort of thing that would ordinarily go in the opinion section. But let’s look at the substance.

The piece tells us:

“The breach of the threshold, which was revealed in a Treasury Department report, comes at an inopportune moment, as historically low interest rates are being replaced with higher borrowing costs as the Federal Reserve tries to combat rapid inflation. While record levels of government borrowing to fight the pandemic and finance tax cuts were once seen by some policymakers as affordable, those higher rates are making America’s debts more costly over time.”

It then gives the views of two deficit hawks, along with warnings from the Congressional Budget Office (CBO) that, “investors could lose confidence in the government’s ability to repay what it owes.”

So, the big issue is that paying interest on the debt is going to become more costly over time. This is very plausible, but it might have been helpful if we had some context as to how large this cost will be, instead of just trying to scare readers with the really big numbers.

The most obvious starting point is the ratio of interest payments to GDP. This is actually still near historic lows, CBO projects interest to be equal to 1.7 percent of GDP in the current fiscal year. It does project the cost to rise, both because of an increase in the debt to GDP ratio and also due to higher interest rates. However, even with this rise, the ratio of interest payments to GDP only hits its 1990s peak of 3.2 percent of GDP in 2032. 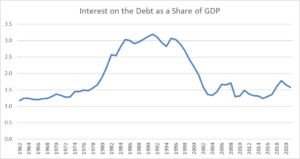 It’s also worth noting that the 1990s were actually a very good decade for the economy. We didn’t suffer in any obvious way from the high ratio of interest payments to GDP. This means that if the CBO projections prove accurate and we actually see the ratio of interest to GDP rise to the 1990s levels, it hardly implies some sort of economic disaster.

What About Government-Granted Patent and Copyright Monopolies?

It is bizarre that people complaining about government budget deficits literally never express concern about the government’s granting of patent and copyright monopolies, which can raise the price of protected items by many thousand percent above their free-market level.

As should be obvious, direct spending and patent and copyright monopolies are alternative ways for the government to pay for things. We can either have direct public funding, or we can tell companies to innovate or do creative work, and we will give them a monopoly over what they produce. For some reason, the New York Times is very concerned about the costs of the former, but doesn’t seem to care at all about the latter mechanism the government uses to pay for services.

Since I get tired of writing the same thing all the time, I’m just going to lift what I wrote in a blog post last year.

The more important part of this story is that the conventional calculations of the debt leave out the higher prices that we will pay for items like prescription drugs and computer software because of government-granted patent and copyright monopolies. This is a huge burden, which is many times larger than the debt burden, but policy types and reporters refuse to ever talk about it for some reason.

This is a simple and logical point. The government can pay for things by writing checks. It typically does this with things like roads, bridges, and teachers’ salaries.  It can also pay for things by giving out patent or copyright monopolies.

When the government gives out these monopolies, it is telling innovators or creative workers to develop a new product or write a new book, and you will be given a monopoly for a period of time. This government-granted monopoly will allow you to charge a price that is far above the free market price.

This point has nothing to do with whether you think patents are a good way to support innovation or copyrights are the best way to support creative work, it is a logical point. If the government will threaten to arrest anyone who produces the Moderna vaccine, Moderna gets to charge a much higher price than if everyone in the world can produce the vaccine.[2]

This brings us back to my question: how can someone who claims to be concerned about the burden of the government debt on our children, ignore the burden, in the form of higher prices, created by government-granted patent and copyright monopolies? If the government were to put a tax on prescription drugs to help cover its debt service, we would all recognize this tax as a burden on households.

Yet somehow, we are supposed to believe that if the government gives out a patent monopoly that allows a drug company to charge a price that is far higher than the free market price, that is not a burden. That makes zero sense.

And this burden is very large. By my calculations, the higher cost due to patent monopolies and related protections comes to more than $400 billion (1.8 percent of GDP) in the case of prescription drugs alone. If we add in the higher costs that we pay for medical equipment, computers, software, and a variety of other items, the burden likely comes to more than $1 trillion a year, or 4.5 percent of GDP.

This is more than four times the burden of the debt, but the folks who complain about the debt burden on our kids never talk about it. This is simply not honest. If we are genuinely concerned about the burdens the government is imposing on our children, then we don’t get to selectively pick which burdens we will talk about.

The Deficit and Patent and Copyright Monopolies

There is a similar story with the deficit and these monopolies. And again, it is a matter of logic, not whether we think they are good mechanisms for supporting innovation and creative work. (I talk about alternatives in chapter 5 of Rigged [it’s free].)

Patent and copyright monopolies are intended to motivate people to innovate and do creative work. This means that they increase spending and GDP. The concern over large deficits is that the government is over-stimulating the economy, that it is demanding so many goods and services that the economy can’t meet both the demand from the private sector and the government.

If this is a concern, why should we not also be concerned about the increased demand created by government-granted patent and copyright monopolies? According to the National Income and Product Accounts (Table 5.6.5, Line 9), the pharmaceutical industry spent $105.7 billion on research in 2020. This has the same impact on demand in the economy as if the government spent another $105.7 billion on research.

How can we be concerned about the inflationary impact of government spending, but not the patent-induced spending by the industry? That makes zero sense.

Is an Honest Budget Debate Possible?

The point here is that we need to have honest discussions about debt and deficit concerns. The current discussions are not remotely honest because they refuse to take full accounting of the mechanisms the government uses to pay for goods and services. Others can debate whether this is due to laziness or deliberate dishonesty, but the media’s reporting on debt and deficits is not serving the public.

[1] The burden would be considerably lower if we adjusted for inflation, but we will leave that one alone for now.

[2] The government doesn’t directly threaten to arrest someone for infringing on a patent or copyright. Typically, the holder of the monopoly would go to court seeking damages and an injunction ordering the person to stop the infringement. If the person ignores the injunction and continues infringing, they could go to jail for ignoring an injunction.