NYT Tells Readers that Airfares Are Up “Nearly 29 Percent From a Year Ago,” Forgets to Mention They Have Risen 0.7 Percent Since the Pandemic Began

The media have been hyping inflation pretty much from the day President Biden took office. Today, we got great news on this front from a Consumer Price Index (CPI) report showing that overall inflation fell 0.1 percent in December. This is the 6th straight month where the overall CPI showed low inflation. While there are still grounds for concern, the picture looks pretty damn good at this point.

However, the media is not prepared to give up its inflation hysteria so quickly. The New York Times was on the job, raising some reasonable warning signs, then adding:

“Airline prices fell in December but remained nearly 29 percent higher compared with a year ago.”

While a 29 percent year over year increase might sound pretty scary, it’s actually not very scary to anyone who follows the data. Airline prices plummeted at the start of the pandemic, because people were not flying. They then bounced back more or less to where they had been before the pandemic. Here’s the picture. 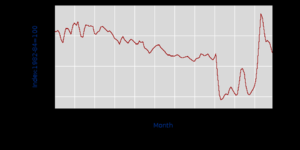 The CPI index for airfares in December was 0.7 percent higher than its level in February of 2020. That is probably not the sort of price increase that will get the Fed or anyone else too worried about inflation.