Percent of Uninsured Falls as ACA Continues to Do Its Job

As a policy, the goal of the Affordable Care Act (ACA) is to reduce the number of uninsured people in the United States. With the release of the Census Bureau report on health insurance coverage for 2015, it is hard to make the case that the ACA has not been a success. The report demonstrates that the number of uninsured in the U.S. has continued to fall significantly and at 9.1 percent, it is now at the lowest level to date.  And while the number of uninsured did not go up in any of the 50 states or the District of Columbia, the rate of the change in the uninsured varied between states.

The trend of increased coverage held across different age, educational, and racial demographics and is consistent with results from the Centers for Disease Control and Prevention’s National Health interview Survey, which also found the share of the uninsured to be 9.1 percent. As well, the Census Bureau’s American Community Survey gives historical estimates of health insurance coverage. Looking back to 2008, the percent of uninsured had risen prior to 2010. It was at this time that an early provision of the ACA began to allow adults to remain on their parents’ health insurance plan until the age of 26 and the percent of uninsured began to decrease. This group has continued to see the largest decreases in the number of people uninsured with 2015 showing an additional decline of 2.6 percent. 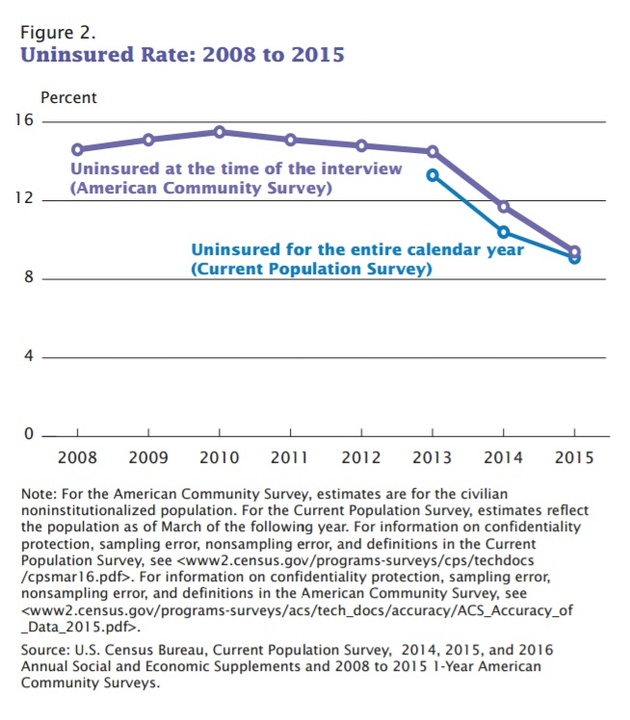 Since the full implementation of the ACA, the overall number of uninsured has continued to fall as well and was at 29 million or 9.1 percent in 2015. This is down from 33 million (10.4 percent) in 2014 and 41.8 million (13.3 percent) in 2013. As well, this is below the 2012 CBO estimate that the number of uninsured would be 32 million last year. Of those people covered by health insurance plans, 67.2 percent were covered by private insurance — provided by the employer, a union, or purchased by a private individual directly from an insurance company through a health care exchange — and 37.1 percent were covered by public plans.

At all education levels, there was a reduction in the number of people with health care coverage in 2015. The biggest gainers here were people without a high school degree, who saw 2.8 percent in the share of insured people in 2015 and is up by 10.6 percent since 2013. For the those with a graduate or professional degree, 95.1 percent were covered in 2014, and this number only increased by 0.1 percent in 2015.

For the most part, the percentage of people without health insurance fell in the states and the District of Columbia. While the number of uninsured did not fall in North Dakota, South Dakota or Wyoming, there was no significant change. The highest uninsured rate was in Texas at 17.1 percent. The lowest was Massachusetts at 3.3 percent.  States that expanded their Medicaid programs beginning in 2014 saw lower rates of uninsured (7.2 percent) than those that chose not to expand (12.3 percent).

The decrease in the number of uninsured across metrics is clear evidence that the ACA is succeeding at its goal of increased access to health insurance.

Preview: Will Job Growth Remain Strong in a Slowing Economy?