Performance of Private Equity Investments of the California Public Employees Retirement System: What are the Issues?

This post was written by Eileen Appelbaum and Rosemary Batt, co-authors of “Private Equity at Work: When Wall Street Manages Main Street.” The presentation accompanying this post is available here as a PowerPoint. 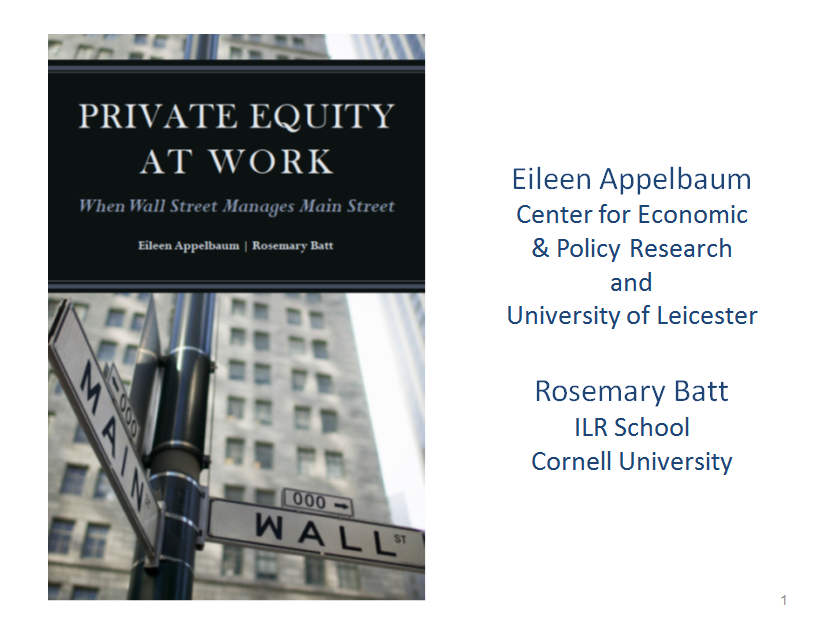 On November 16, the staff and board of CalPERS, the California Public Employees Retirement System, held a review of its investments in public policy. This presentation reviews the major issues the pension fund should consider.

Second, private equity (PE) funds performed pretty well in the decade from 1995 to 2005, with the median fund launched in each of those years beating the Russell 3000, a stock market fund made up of companies similar in size to those in private equity portfolios. However, the median fund in every vintage launched in the years after 2005 has failed to beat the market. Investors in half the funds launched after 2005 would have done better investing in an index fund that mimicked the Russell 3000.

Third, CalPERS PE investments haven’t beaten its stock market benchmark in year-to-date, 3-year, 5-year, and 10-year windows. It does beat the stock market index in the 20-year time frame, but this is largely due to the stronger performance of PE funds a decade ago.

As we explain in the presentation, while the internal rate of return (IRR) is private equity’s most commonly used metric, it is a flawed measure that exaggerates performance and does not predict actual returns from investments in PE. The measure used by academic researchers and many financial firms is the public market equivalent (PME). These terms are defined in the power point. A PME of 1.20, for example, implies that at the end of the fund’s life, investors will earn 20 percent more than if they had invested in the stock market. PE funds typically have a 10-year life span, so this implies an average annual outperformance of a little less than 2 percent a year.

Harvard finance professor and private equity consultant Josh Lerner relies on two highly regarded studies of PE fund performance in his presentation to the CalPERS board and staff. He presents the performance of funds launched in the years 2000 to 2008 as compared to the S&P 500, and reports that the average PME of funds launched in this decade is 1.27 and the median is 1.25. This implies annual outperformance of about 2.4 percent a year. But the data for this period are mainly estimates of the value of companies owned by the PE funds because a majority of the companies owned by these funds had not yet been sold and the funds had not been liquidated at the time the study was done.

A second study of liquidated funds was also cited by Josh Lerner in his presentation to the CalPERS board and staff. That study, which is based on actual returns and not on estimates, found that the median PE fund beat the S&P 500 by less than 1 percent a year, and did not beat an index fund tailored to match the companies in the PE funds at all. Investors in half the PE funds would have been better off investing in a stock market index fund. This study also showed that funds in the lowest quartile under-performed the stock market by 2 percent annually, while those in the top quartile outperformed it by 3 or 4 percent a year. Investors in those funds beat the market by a margin sufficient to reward them for taking on the extra risk. Except in Lake Woebegone, however, pension funds cannot all be invested in the top 25 percent of funds.

How does the performance of CalPERS’ private equity portfolio compare to these patterns? Recall that the absolute return is not an appropriate measure of performance in the case of risky investments, in which returns can go down as well as up. For risky investments, investors need to achieve returns over and above a benchmark that adjusts for risk. CalPERS absolute returns are 14 percent in the 3-year and 5-year time frames, and 12 percent in the 10-year and 20-year windows. CalPERS also provides information on how its own private equity investments performed relative to its own investments in the stock market, not relative to its preferred stock market index, but to the stocks and stock funds it picked to invest in. The absolute PE returns look good here, but that is because CalPERS stock market investments performed poorly. CalPERS appears to have over invested in large cap and foreign stocks that underperformed the broader stock market.

CalPERS agrees that “PE should generate a premium over long term equity returns to compensate for the challenges.” CalPERS’ benchmark is comprised of

CalPERS has underperformed this benchmark in 3-year, 5-year and 10-year time frames. Over the last 10 years, CalPERS would actually have made the same return by investing in index funds that mimicked its benchmark, without opening itself to the risks attached to investments in private equity. CalPERS PE investments did beat the benchmark over a 20-year period, but this was largely driven by investments in the first decade when, as we discussed earlier, half of all PE funds beat the stock market.

CalPERS has chosen a benchmark that is easier to beat than the Russell 3000 (because the benchmark includes large cap stocks) and harder to beat than the S&P 500 (because the benchmark includes small and medium cap stocks). There is nothing sacrosanct about either the stock market indexes in the benchmark or the risk premium of 300 points (3 percent). CalPERS may want to change either or both. But the pension fund needs to make a case for any changes it proposes. It can’t just move the goal post closer to make it easier to beat.

Of course, private equity firms earn lots of money whether the investments their funds make succeed or fail. Fee income has become increasingly important, including management fees charged to their investors and advisory or monitoring fees charged to their portfolio companies. Not satisfied with this income alone, some PE firms have engaged in practices to reduce their taxes as well — practices that abuse the relationship with investors (as identified by the Securities and Exchange Commission (SEC)) or abuse the tax code (IRS).

The SEC found that a large proportion of the PE funds they examined had charged fees and expenses to investors in their funds that were already covered by the management fees these investors paid.

Management fee waivers are an abuse of the tax code. Here, PE firm partners use sleight of hand to transform management fees that are taxed as ordinary income into profits that are taxed at the lower capital gains rate. Congress passed legislation to deal with this situation in 1984. In July of this year, the IRS and Treasury proposed regulations that further clarify that this practice does not conform to the tax code. The proposed regulations make it clear that disguising income for services as profit income is not acceptable to the IRS. Pension funds and other investors should be on guard to ensure that they do not invest in funds that use these practices.

In the case of fees charged to portfolio companies, the tax code says that services to be provided need to be spelled out in a monitoring fee contract, and the fee for the services needs to be commensurate with the services provided. Recently, whistle blowers have come forward to affirm that PE firms have negotiated contracts with portfolio companies for millions of dollars that do not require the PE firm to perform any service at all. If no services are performed or the services are not commensurate with the payment, then these are actually dividends paid to the PE firm disguised as monitoring fees. The monitoring fee payments reduce the tax liabilities of the companies the PE fund owns; paying dividends does not have this benefit. This is also an abuse of the tax code that pension funds and other investors should not tolerate.