This post was originally published at Girl w/ Pen.

Often, when we see improvements by all (be it in educational attainment, income, health, etc.), we overlook the fact that gender or racial gaps still persist or have even gotten worse. There has been much attention given, and rightfully so, to all of the progress that women, and black women in particular have made. But, what about where women stand in relation to men? Or where black women stand in relation to white women? If significant gaps still persist, can we be satisfied with the progress we’ve made? Or is there still work left to be done?

As a young black woman, sociologist, and researcher at an economic policy think tank, I am particularly sensitive to this and make a point to address these issues in my work at CEPR (Center for Economic and Policy Research). It’s part of the reason why I began my Young Black America series of reports that strive to answer the question, “What’s going on with young blacks today?” An important goal of the series is to explore the intersection of race and gender while tackling the issues facing young people today. 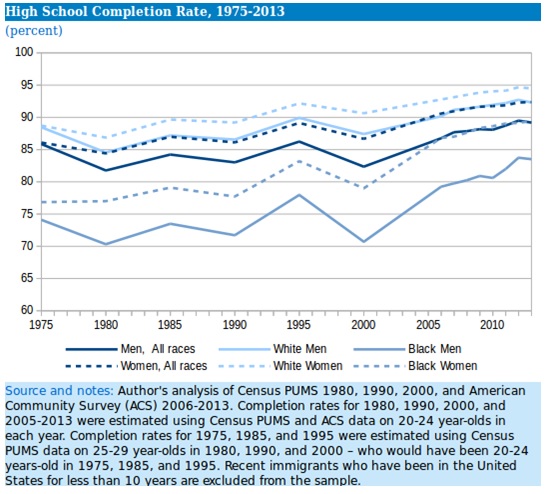 But, what I found most interesting was what happens when you throw race into the mix. In 1975, 88.7 percent of white women between the ages of 20 and 24 had completed high school with either a high school diploma or a GED. During that same year, the rate for black women was only 76.9 percent, for a black-white gap of 11.9 percentage points. Since then, white women have maintained this sizable advantage, which averaged about 11 percentage points through 2000. In 2000, the completion rates for black and white women were 79.0 percent, and 90.6 percent, respectively.

Closing achievement gaps should be an important part of any economic agenda. While a lot of attention is given to racial and gender achievement gaps separately, the double burden of being both a woman and a racial minority can present a unique problem for black women.

So, yes, we should take a moment or two to celebrate these accomplishments. The high school completion rates of young women are at their highest ever, and remain higher than the rates of men. Although black women still lag behind their white counterparts, this gap has been trending downward for more than a decade and hopefully will continue to do so.

But as we all know, in order to realize racial and gender economic equality, education is just one piece of the puzzle. Increases in high school completion rates are important because they widen the pool of potential college entrants and graduates—with a college degree becoming increasingly necessary in today’s economy. However, even a college degree doesn’t guarantee labor market success, as my former colleagues Janelle Jones and John Schmitt at CEPR have shown. We must not ignore issues of racial and gender discrimination, or other structural issues that are at the root of many of the economic problems we face in this country. Subsequent reports in my Young Black America series will address these and other issues facing young blacks.