Last year, CEPR put out a short report examining the changes in part-time employment over the first six months of 2014 compared with the first six months of 2013. The point was to see whether there was evidence of the negative effects predicted by Affordable Care Act (ACA) critics in the form of an increase in involuntary part-time employment. We also wanted to see if there was evidence of positive effects in the form of more people choosing to work part-time. Since the ACA allows workers to get health insurance through the exchanges, they no longer need to work full time in order to get health insurance through their jobs.

Now that we have more data available, we wanted to see if this result held up using a full year’s worth of data. Table 1 below compares the percentage of people voluntarily working part-time in 2014 and 2013. 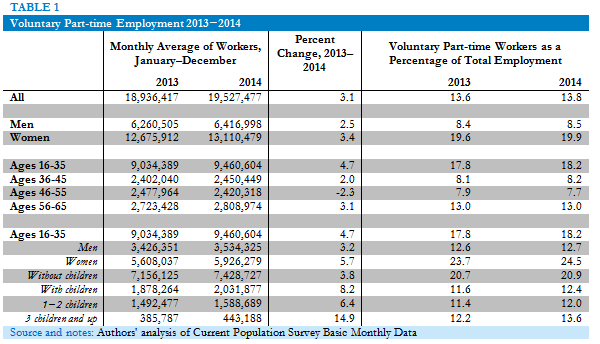 As can be seen, the results hold up with the full year’s data. Overall, the number of people voluntarily working part-time increased by 3.1 percent from 2013 to 2014. This increase was concentrated among younger workers, although there was a substantial increase in voluntary part-time among older workers also. In particular, there was an increase in voluntary part-time employment of 8.2 percent among young workers with children. For those with three or more children, the increase was 14.9 percent.

Interestingly, this analysis also finds a substantial increase in voluntary part-time employment among older workers between the ages of 55–64. These workers, who are not yet eligible for Medicare, may appreciate the opportunity to work part-time while getting insurance through the exchanges. It will take further research to determine the characteristics of the older workers that have opted to work part-time, but this analysis provides further evidence that the ACA is very much a family-friendly policy.