The Wage Dividend from Low Unemployment

While the benefit from lower unemployment in terms of more people having jobs is pretty straightforward, there is also a benefit to workers in the form of higher wages. The basic story is that lower unemployment means a tighter labor market and therefore more rapid wage growth.

The relationship between low unemployment and more rapid wage growth shows up most clearly for more disadvantaged workers. When the economy goes into a slump, it is more likely that a retail clerk or person on the factory floor will lose their job, than a manager or a highly educated professional, like a doctor or dentist.

This means that when the unemployment rate soars, as it did in the Great Recession, it is the workers at the bottom of the ladder who are at greatest risk of losing their jobs. They are also the ones who see the largest loss in pay, as their bargaining power diminishes with their employment opportunities.

This reverses as the labor market tightens. The ones who have benefited most from the tighter labor market of the last few years in terms of employment growth have been racial and ethnic minorities and less-educated workers. The benefits for those who are at the bottom also show up in terms of wage growth.

The figure below shows real wages since 2008 at the cutoff for the tenth and ninth deciles of the wage distribution, as well as the cutoffs for the first quartile, the median, and the third quartile. These data show usual weekly earnings. (The base is the year-round average for 2007.) The changes in this measure reflect both changes in average hours and also in hourly wages. 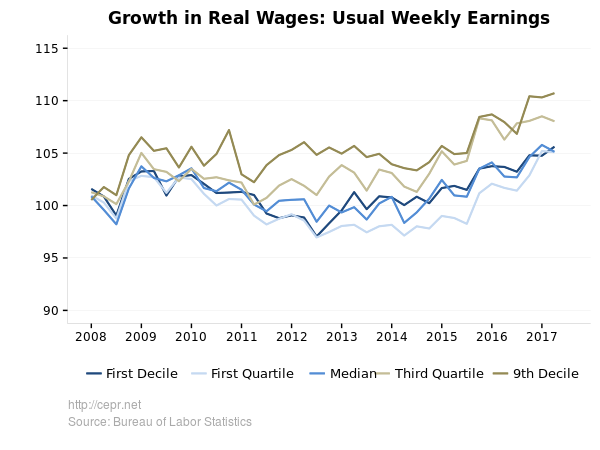 As can be seen, workers at the cutoff for the top decile of the wage distribution (the 90th percentile) continued to see modest wage growth through the Great Recession and the recovery.[1] By the first quarter of 2013, when the overall unemployment rate stood at 7.7 percent, their average weekly earnings were almost 5.0 percent higher than the average for 2007, a gain of a bit less than 1.0 percent a year. Workers at the third quartiles cutoff also saw modest gains, with average weekly earnings 3.9 percent higher than the average for 2007.

In short, at that point in the recovery, most workers had not seen any benefit in the form of higher real wages from the growth since 2007. Workers at the 90th percentile had seen modest gains, as had workers at the 75th percentile.

This is yet more evidence for the benefits of a tighter labor market for relatively disadvantaged workers. If the Federal Reserve Board allows the labor market to tighten further, we can expect to see further gains by the most disadvantaged groups of workers.

[1] It is worth remembering that even the 90th percentile is well below the top one percent, who have seen their pay sharply diverge from the rest of the workforce over the last four decades.