More than two weeks after Haitians went to the polls to elect a new president, 16 Senators and 25 Deputies, preliminary results from all races have finally been released. Presidential results have already been contested by the second, third and fourth place finishers while many legislative races will likely be contested as well. However, if the preliminary results are upheld, the November 20 elections will have consolidated nearly unprecedented political power in the hands of PHTK, the party of former president Michel Martelly. While PHTK and its allies appear to have scored electoral victories at both the presidential and legislative level, their political success has occurred in a context of extremely low turnout, raising questions about the significance of their mandate to govern moving forward.

At the presidential level, Jovenel Moïse of PHTK came in first place with 55.67 percent of the vote. If these results hold,  Moïse will secure the presidency without having to compete in a second-round election. In second, third and fourth place were Jude Celestin of LAPEH with 19.52 percent, Jean-Charles Moïse of the Platfom Pitit Dessalines (PPD) with 11.04 percent and Maryse Narcisse of Fanmi Lavalas (FL) with 8.99 percent.

While the top four vote getters in the 2016 election were exactly the same as in last year’s election, the results of which were thrown out due to widespread irregularities, the composition of the vote changed dramatically. Jovenel Moïse, who was widely believed to have benefitted from fraud in the 2015 elections, was the only one of the four to increase their vote total over last year. This appears to largely stem from the far wider geographical support that Jovenel Moïse received in 2016, coupled with the other top candidates losing substantial ground. 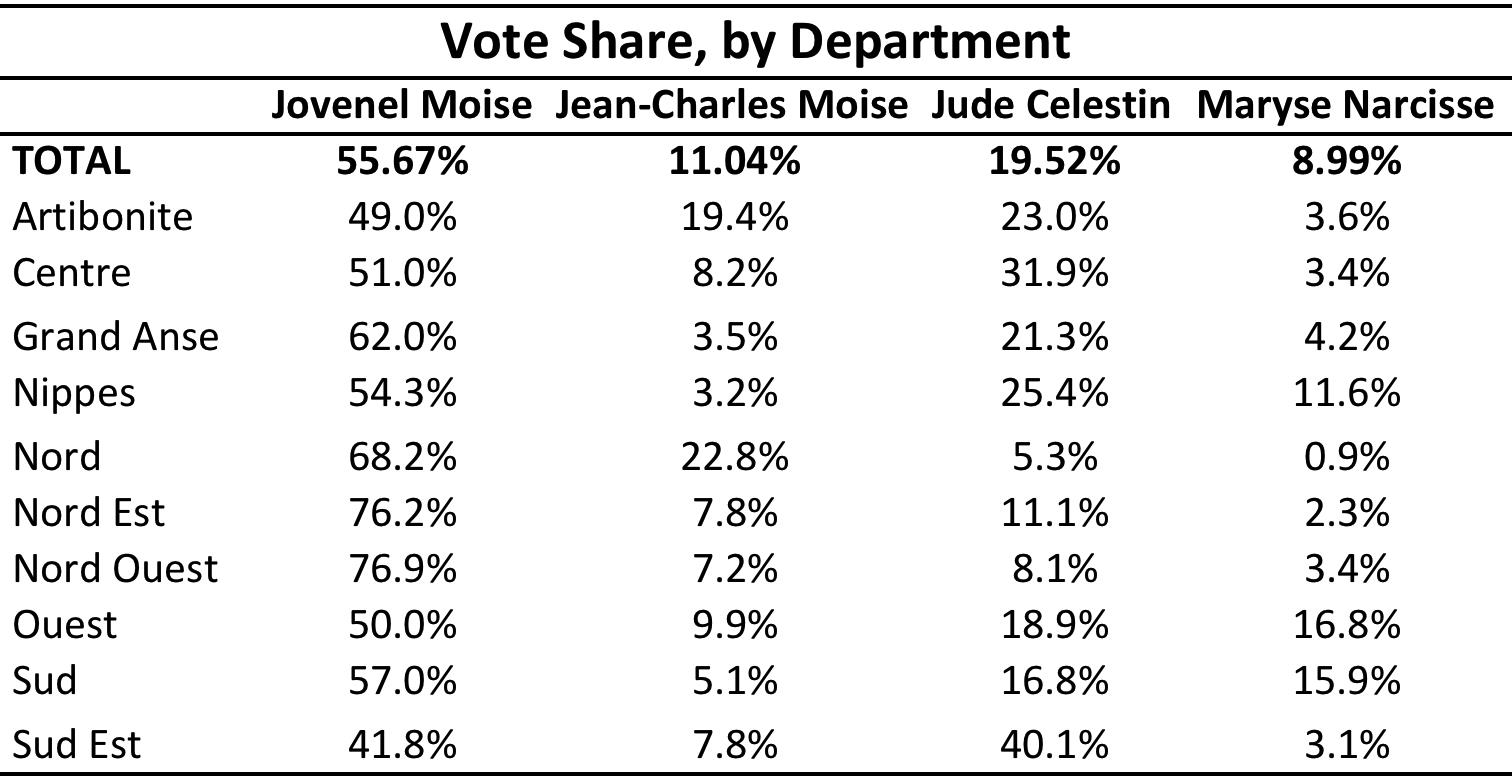 Still, even with Jovenel Moïse increasing his votes from 2015, the main reason why he was able to win in the first round was that all three other candidates lost significant numbers of votes. Celestin received 185,000 fewer votes, Jean-Charles 104,000 and Narcisse 14,000. If these candidates had simply received the same number of votes as last year, Jovenel Moïse would not have been able to win in the first round.

The long campaign, and the consolidation of private sector funding behind PHTK certainly helped in this regard. With more resources, PHTK was able to more actively campaign and build support throughout the last year. It takes significant money to have party staff across the entire country, an especially important factor in getting one’s supporters to come out to vote on election day. As a result, PHTK had a wider national presence of political party representatives than other parties, according to local observer organizations.

Another factor that contributed to the vastly different result was that many more voters were either unable or unwilling to participate in this year’s election. The Provisional Electoral Council (CEP), announced that participation was just 21 percent, compared to 26.6 percent last year. However the rate announced by the CEP includes many thousands of votes that were not counted due to irregularities. If one looks just at valid votes, the participation in this year’s election drops to 17.3 percent. The 26.6 percent figure from last year was based on valid votes.

As can be seen in the table above, if the preliminary results hold, Jovenel Moïse would become president of Haiti with the support of just 9.6 percent of registered voters, or about 600,000 votes. While this is far more than any of his closest competitors, this raises significant questions about his ability to galvanize the country once in office.

As can be seen in the table above, since the 2010 earthquake, participation in presidential elections has plummeted, with this year being the lowest in Haiti’s history. A lack of faith in the electoral system, voter apathy, and barriers to participation appear to all have contributed to this long-term decline. With participation so low, the political stability that elections were expected to bring will be difficult to ensure.

In the November 20 election, first round races for ten Senate seats were held. In addition, second round elections were held for six Senate seats and 25 Deputy seats, these being the completion of last year’s aborted election. In the commune of Roseaux, the election for Deputy was unable to be held due to flooding and the inability to properly distribute voting materials.

While results from the presidential election in 2015 were thrown out, in January 2016, 92 Deputies and 14 Senators elected in the same process were sworn in to office. Haiti had been without a functioning parliament since January 2015 after no elections were held during Martelly’s first four years in office.

Over the last year, parliament has largely been split between political factions and unable to pass much in the way of legislation. When interim president Jocelerme Privert’s 120 day mandate expired, parliament was unable to hold a vote on replacing or extending him.

As would be expected given the performance of Jovenel Moïse at the presidential level, PHTK candidates for the Senate and Chamber of Deputies also performed well according to the preliminary results.

In the 24 Deputy races, candidates representing 14 different political parties secured seats, bringing the total number represented in the Chamber of Deputies up to 25. PHTK led all parties by winning 5 seats, however together with close allies KID, AAA, Bouclier and Consortium, the bloc picked up 9 seats. Together, these parties now have at least 53 of the 116 members in the Chamber of Deputies. Though not an outright majority, with the rest of the political sphere split, it gives PHTK and its allies by far the largest voting bloc. 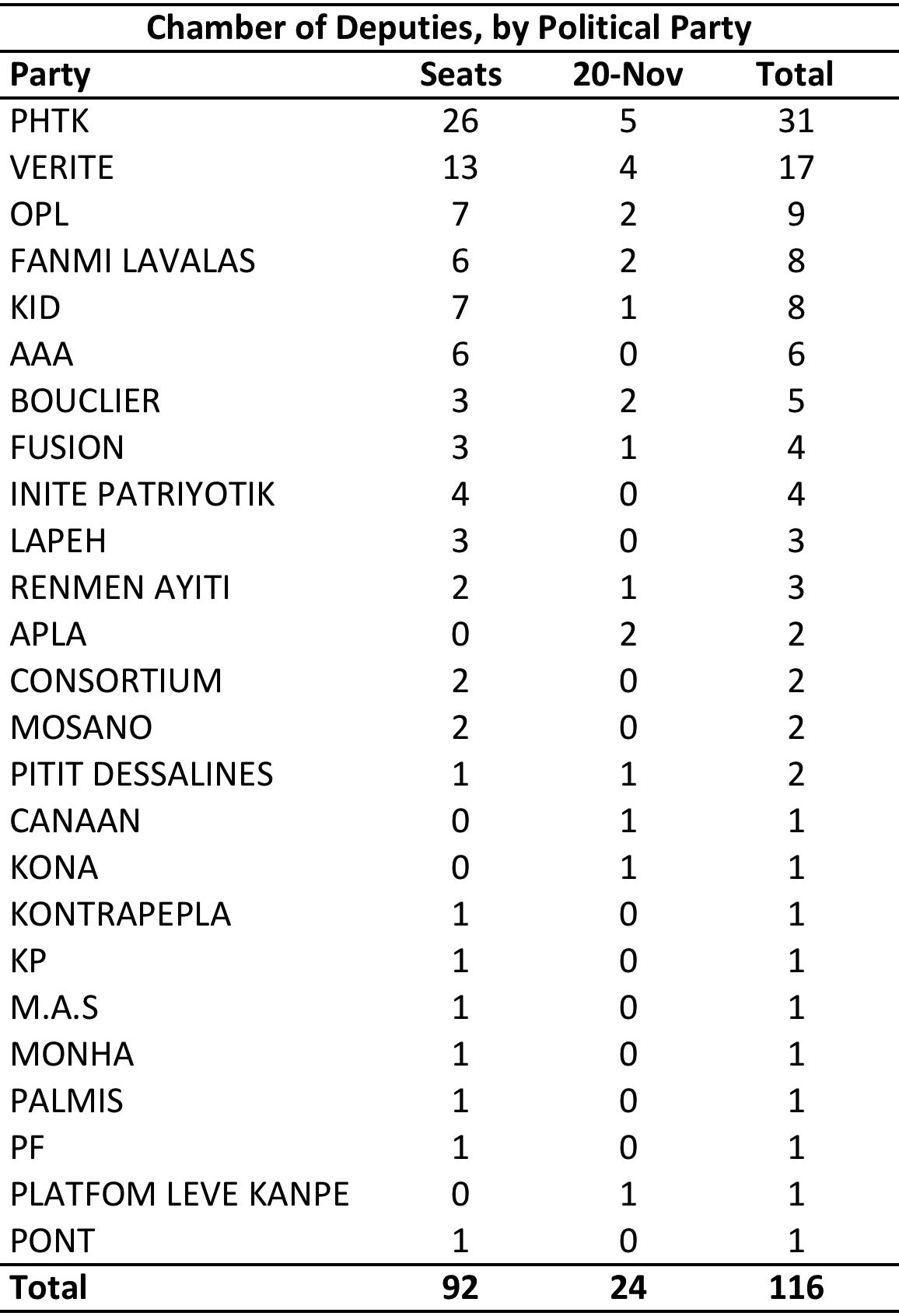 Sixteen Senate seats were also up for grabs on November 20. In those races, six of which were second round elections, PHTK secured an additional four seats, while allies Bouclier and Consortium each picked up one. In the eight departments where second round Senate elections will be held in January 2017, PHTK has five candidates while Bouclier, AAA, Consortium and Kid combine for an additional five.

Perhaps most notable among the list above is the presence of Guy Philippe, elected to the Senate from the Grand Anse department. Philippe was a paramilitary leader that helped oust Jean-Bertrand Aristide from power in a 2004 coup, has been accused of extrajudicial killings while a police commander in the 90s by Human Rights Watch, and more recently was allegedly involved in the armed raid of a police station in the southern city of Les Cayes. He is also a DEA most-wanted fugitive for his role in drug trafficking and money laundering. Philippe campaigned with Jovenel Moïse over the last year.

Also of note is former Senator Joseph Lambert, who ran and lost under the PHTK banner in last year’s election. He is now set to return to the Senate under the KONA party.

With the election of six Senators, PHTK and its allies look poised to secure an absolute majority in the Senate. The bloc is guaranteed to pick up at least two additional seats in the second round senate election in January, as candidates from allied parties compete against each other in the Centre and Artibonite departments. Overall, in the eight departments that will have second round elections, PHTK or parties allied with it came in first in seven. 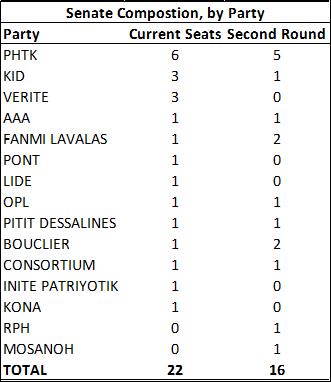 Participation of Women in Parliament

The November 20 election did see the first woman elected to parliament. Of the 106 Deputies and Senators that were sworn in last year none are women, despite women making up more than 50 percent of the population. Based on preliminary results however, four women have been elected to parliament, one in the Senate and three as Deputies.

The electoral law mandated that at least 30 percent of candidates for office be women, however the actual number who registered and campaigned was far lower. There have also been many efforts to increase the participation of women in elections. Among the data published by the CEP in the preliminary results is a tally of the number of women who voted at each voting booth, which would allow for further analysis and improvement going forward.