China Has the World’s Largest Economy: Get Over It 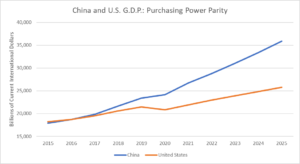 Purchasing power parity (PPP) measures of GDP are based on applying a common set of prices for all goods and services produced across countries. While it is difficult to measure accurately, most economists view PPP as being the better way to calculate GDP, since it reflects living standards and does not fluctuate with currency values. China does have four times the population of the United States, so it is still much poorer on a per capita basis.

The fact that China has a larger GDP than the United States is important for policy debates since many people seem to hold illusions about the ability of the U.S. to influence China. While the United States can take steps that will damage China’s economy, even the harshest measures will only have limited impact, and China will be able to take steps to overcome them through time. This is important background for debates on China policy.

Industrial Policy Is Not a Remedy for Income Inequality

The Case for the Trumpers’ Anger

The Semiconductor Bill and the Moderna Billionaires