In July, I reported for Al Jazeera America on USAID’s support for a group in Haiti, Mouvement Tet Kale (MTK), which had strong ties to President Martelly and his political party, Parti Haitiene Tét Kale. USAID supplied hand tools to the group (to clean the streets as part of a “civic engagement” program) in the lead up to Martelly’s presidential inauguration in May 2011. In an e-mailed statement, USAID stated that “Mouvement Tet Kale is not the same thing as the Tet Kale party, which came into being in 2012–a year after the inauguration and the grant.” Rather, USAID described MTK as a “social network of community-based organizations.”

But a contract document, released in response to a Freedom of Information Act request, clearly shows that from the beginning USAID was aware of the group’s political ties. The project document released by USAID contains an activity summary that also describes MTK as a “social network of community-based organizations”; however, the sentence continues: “founded by Michel Martelly campaign members.” That is a pretty significant omission. 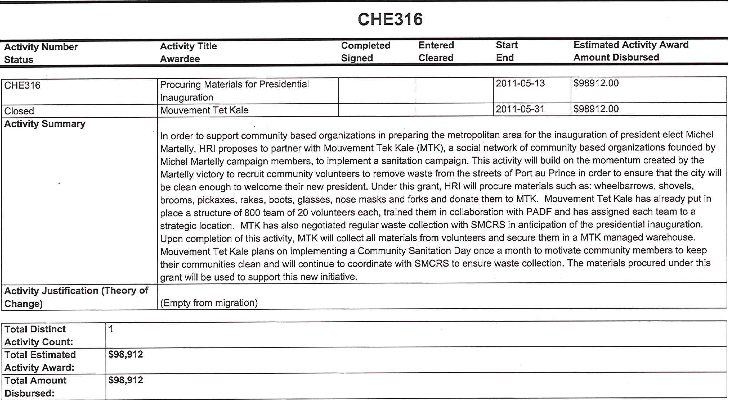