Disability Spending Is Not Responsible for Low Employment

Earlier this month the Washington Post’s editorial board published a criticism of the Social Security Disability program. Noting the decline in labor force participation amongst prime-age men, the board suggests that the disability program discourages its recipients from working. The article argues that the sudden loss of cash benefits (and affordable health insurance) when recipients rejoin the workforce might persuade many to remain on disability when they are able to work.

It seems unfair to lump these two factors together, since the program’s modest monthly benefits are far less than the wages of any near full-time job, while the loss of health insurance, especially for disabled workers who may require additional services, would be devastating. The Post is probably right to say that health insurance costs play a strong role in workers’ choices about their employment level, but that suggests a different type of reform. 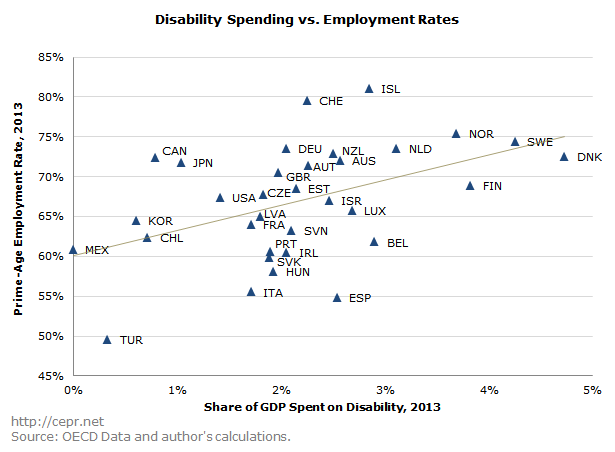 This doesn’t necessarily support a causal relationship between disability programs and increased employment, there are many programs that might lead to higher employment which are also likely to go along with generous disability benefits (free college, for example), but it does strongly counter The Post’s claim. Disability insurance might not cause higher employment but it certainly does not seem to be discouraging it. The Post seems especially out of line in claiming that the U.S. disability program, which is one of the least generous of any wealthy country, is somehow a major factor in reducing labor force participation. Far more likely is that labor force participation rates for prime-age workers are low because the job market has still not recovered fully from the recession.