After not showing up to its own scheduled press conference on Wednesday, Haiti’s Provisional Electoral Council (CEP) announced on Thursday that they would be re-running the first round legislative elections in 25 towns throughout the country. The CEP also announced participation rates at the national level and for each of the 10 departments during the press conference. However, no results were announced, instead, the CEP directed people to its website where results were supposed to be posted. The website was down until around 4 AM Friday morning when official results were finally made available.

Leaked results had been reported by Haitian radio and on social media throughout the day Thursday and ended up matching exactly those later released by the CEP. In a country where most get their news from the radio, the CEP’s posting of results online likely excluded many from obtaining them.

What follows is a breakdown of the results; which parties and candidates will be moving on to a second round, key figures of voter participation and irregularities and what information is still missing.

Reports from election day indicated extremely low voter participation throughout the country and that was backed up by the posted results. Still, many have raised questions about the numbers released, and there are significant questions that remain unanswered. According to the CEP, the national participation rate was 18 percent, with the lowest participation observed in the West department, at just under 10 percent. 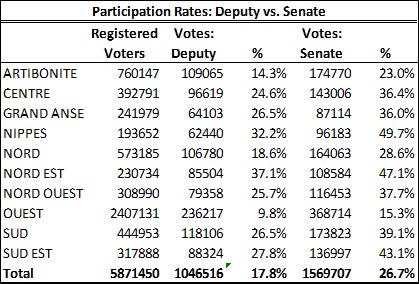 While the announced participation matches the results from the Deputy race, the number of votes counted is 50 percent higher for the Senate. This is to be expected, given that Haitians were choosing two senators from each department and could vote twice. None the less, it appears as though only about half actually chose to do so.

The extremely low turnout in the West department is also noteworthy. It is Haiti’s largest department, with 41 percent of registered voters. It is also one of the areas most impacted by electoral violence and the closure of voting centers. This could play a bigger role in the presidential election; a public opinion survey released early this year noted that the West department was where president Martelly had the lowest approval ratings – more than 15 percent lower than in any other department. With low turnout and a messy electoral process in the first round, will potential voters stay away from the polls all together in October?

Did the CEP Set the Bar Too Low?

At its press conference on Thursday night, the CEP announced that the threshold for having the vote count and not be re-run in October was if 70 percent of tally sheets (PVs) were counted. Based on this figure, the CEP announced that 25 towns would have to re-run elections. The figure below provides those towns, and what percent of tally sheets were counted in each case. 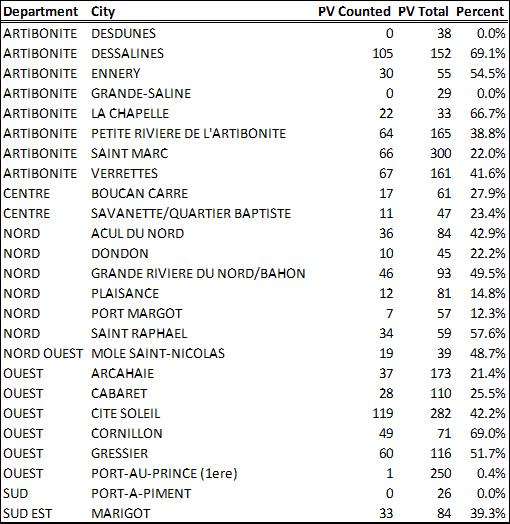 One other town was below the 70 percent threshold, but was not on the list provided by the CEP of elections to be re-held: CERCA-CARVAJAL/QUARTIER DE LOS PALIS. In that area, the PHTK candidate will advance with 76.67 of the vote, though only 66.7 percent of tally sheets were counted. This could be because, according to the electoral law, the vote will only be annulled if the results were impacted; perhaps the CEP determined that the PHTK candidate would win no matter what, but if that is the case, they have not provided an explanation themselves.

The 70 percent threshold also applies to the Senate election, however only one department, the Artibonite, fell below that mark. The figures for all departments can be seen below. 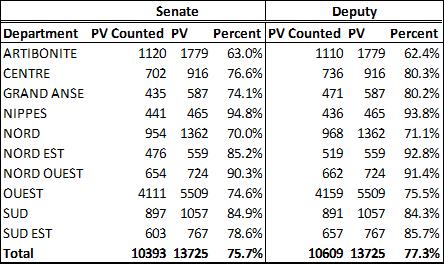 Again, there are differences between the races for Senate and Deputy, but in both cases, the results reveal massive irregularities and disenfranchisement. Looking at the Senate numbers, at the national level, 24.3 percent of tally sheets were never counted; they never made it to the tabulation center to be counted, they were discarded due to fraud or they were discarded for technical reasons. The number is slightly lower for Deputy, but remains worryingly high at 22.7 percent. The CEP has posted all 13,725 tally sheets online, and a more complete breakdown of the reasons for such a low number being counted is forthcoming (though not, apparently, from the CEP).

As can be seen in the above figure, if the CEP’s 70 percent threshold had been raised to 80 percent, Senatorial elections would need to be re-run in six of Haiti’s ten departments. Only the Sud, Nord Ouest, Nord Est and Nippes department had more than 80 percent counted. Was the threshold determined by a statistical analysis? Or was it determined after the fact to ensure a minimum disruption to the electoral process? The CEP has yet to provide any further explanation.

This also comes into play in the election for Deputy; an additional 17 towns are below 80 percent of tally sheets being counted. Local observers and press reported significant problems on election day in a number of towns that fall just above the 70% threshold, for example Jeremie (71.9 percent). A more complete analysis on this point is available here. In only two towns throughout the country were 100 percent of tally sheets counted.

In the deeply flawed 2010 election, the number of tally sheets that were discarded due to irregularities or were never transported to the tabulation center was around 12 percent. The current election, where around twice as many votes were simply never counted, makes the 2010 election look good in comparison and that should be a concern for everyone involved.  The 2010 election was held the same year as a massive earthquake struck Haiti, displacing well over a million and killing hundreds of thousands. Additionally, a nationwide cholera outbreak hit the country just one month before the election. And yet, turnout was higher and there were fewer votes lost due to violence and irregularities.

For the Senatorial election, things are relatively straightforward. As mentioned previously, the Senate election in the Artibonite will be re-run. In the other nine departments, there were no winners in the first round, meaning that the top four finishers will advance to October’s run-off election. The breakdown by party can be seen below. 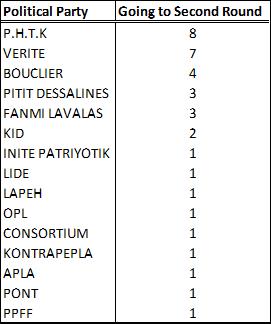 The three parties that will advance the most candidates to the second round are PHTK, Verite and Bouclier (seen as very close to the government). But broken down by department, many of these parties have two candidates advancing in certain departments and in some cases those who finished in third or fourth place are far behind the leading candidates. Below is a breakdown of those parties advancing in the Senate elections, broken down by department and percent of the vote obtained.

As can be seen, no Senate candidate received more than 28.08 percent of the vote in the first round, according to the results released by the CEP. PHTK leads the way with seven candidates finishing in the top two of the voting. Verite is next with three.

A full breakdown of Senate candidates advancing is available here.

With 119 seats up for grabs and over 1,600 candidates running, the deputy results present a more confusing landscape. As mentioned previously, in 25 towns these elections will be re-held as part of the October 25 vote. In the 94 races that will stand (pending complaints registered by political parties), only nine of them saw a winner emerge in the first round. A new aspect to Haiti’s 2015 electoral law is that candidates no longer need to obtain more than 50 percent to win in the first round, candidates also advance if they have a 25 percent lead over their nearest competitor.

Again, it is PHTK that has the most candidates winning outright in the first round, with four. Only three candidates received more than 50 percent, with the remaining five candidates advancing because of the size of their lead over the second place finisher. In some cases, the difference was just a few votes. In Pestel, for example, Ronald Etienne (CONSORTIUM) advanced with a 25.21 percentage point lead. Yet in Pestel, only 70.7 percent of tally sheets were actually counted (more on this in the next section). In Mirebalais, Abel Descollines should advance because his next two closest competitors have been excluded due to their alleged role in electoral violence and he has a 25 percentage point lead over the next closest remaining candidate. *An additional name has been added since this was first posted; Nickel Pierre from the Nippes department. The second place candidate has been excluded for his alleged role in electoral violence, making Pierre a first round winner.

The remaining Deputy races will all be headed to a run-off in October. The parties with candidates advancing can be seen in the chart below. These numbers differ slightly from what was released by the CEP, because the CEP has also excluded 16 candidates for their alleged role in electoral violence. Four of those individuals made it to the second round, but for this analysis were removed and replaced by the third place finisher. As mentioned previously, in one case the exclusions will likely allow the PHTK candidate in Mirebalais to win the election in the first round, despite having only received 38.7 percent of the vote. *An additional case has been found, see paragraph above.

A full breakdown, by location and with candidates’ names, is available here.

With preliminary results released, but only online and with no larger analysis done by the CEP, it will take time for political parties to sift through all of the information and react. There is now a 72 hour period where candidates can contest the election results and it is expected that many will do so. According to the electoral calendar, final results will be released on September 8.

The CEP has also left the door open to excluding more candidates if information about their involvement in electoral violence is found. This means additional candidates on the lists here could still be excluded from participating in a second round.

The chaotic nature of election day and the lack of technical preparation from the CEP have led many to question its legitimacy and capability to continue the electoral process. The press conference on Thursday, where no questions were taken, no results were given, and little information was shared did not help this dynamic. Hopefully the many questions raised by the release of these results (and the manner in which they were released) will be addressed by the CEP in the coming days and weeks.